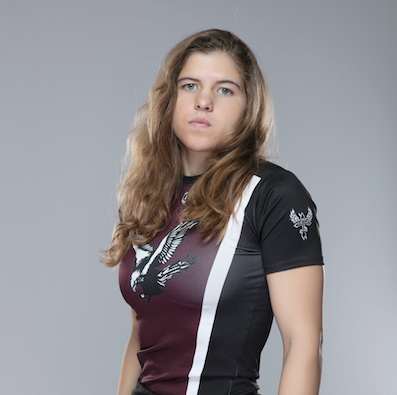 Rising Missouri strawweight talent Miranda Maverick will meet Kal Holliday (Kalyn Schwartz) at Invicta FC 22 on March 25 live on UFC Fight Pass. “The Maverick” is just 19 but had an impressive 7-1 run as an amateur with six finishes and won her pro MMA debut at Invicta FC 20 with a first-round submission of Samantha Diaz last November. Miranda took some time to speak with Pro MMA Now about her influences, her upcoming opponent, her MMA journey so far and more.

From early childhood my dad roughhoused with me and taught me self-defense. Jiu-jitsu was the discipline he focused on because he saw that the strategy was much more beneficial for smaller opponents (which I would typically be in a threatening situation). It turned into more of a passion when I saw the first Ronda Rousey fight in the UFC and at age 12 my dad sat there and told me that I could be the world champion someday if I wanted to. Once I got old enough to drive I went to an actual gym to see if I wanted to excel in the sport and instantly I was hooked. The day I turned 18 I was more excited to be able to fight than anything.

My dad has by far been the most encouraging and supportive person since I began MMA, but my coaches and training partners at Springfield Fight Club also have a great influence on my passion for the sport! As far as an individual in MMA, I liked Miesha Tate, but I still respect Ronda Rousey for her influence in expanding women’s MMA.

As far as my combat sports background, I wrestled my senior year of high school and now train with the Drury Men’s Wrestling Team. My “specialty” is in Brazilian Jiu-jitsu, however, I am getting better and better at my standup game with Muay-Thai and kickboxing.

As I said almost all people who I know are encouraging of my passion, though some are worried for me. My dad is wholeheartedly into the potential I could have with this dream, and almost gets more excited and nervous than I do for my fights!

As a girl, stereotypes are the biggest issue I’ve faced in participating in this violent sport. I am fairly girly (in terms of attitude and dress code, etc.), do not cuss, don’t have crazy colored hair, no tattoos or piercings. I am a so-called clean cut fighter. Plus I am young and I am doing well in school, working full time, AND doing MMA successfully. Many people are also sexist in this sport even in nice ways. From going easy on me in practice (which most soon find is a mistake) to telling me fighting is wrong and not what girls are supposed to do, I have heard all kinds of bad opinions about my dream. However, I love that I can be an example to other girls, men, and women that smaller people or females can defend themselves and can also overcome boundaries!

What is the story behind your nickname “The Maverick”?

My last name is Maverick, and in truth, I exhibit the very definition of the word by being different from the stereotypes which are paired with MMA! “Fear The” which is the nickname part is purely to help instill respect and intimidation on my opponents , almost as a warning to not underestimate me.

You will be facing wrestler Kalyn Schwartz on Invicta FC 22. Thoughts on her? How do you plan to counter her ground game?

I am very confident in my wrestling and ground game in general. I won’t counter…I’m going to be offensive and dominant standing and on the ground. She is a tough opponent though and I am practicing with respect to her wrestling background.

Last time you entered the match as an underdog. Did it affect you?

I like the pressure of being the underdog. I always have. To surprise people, rise from the ashes, only fuels my passion and motivates me more.

You faced problems with cutting weight last time. What went wrong? Did it affect your performance?

I had an unexpected roadblock that will not happen this time. It kept my body from releasing any more water, but I am walking around at a lighter weight and my nutrition is on point this time, with starting-out nutritionist Elle Wagman overseeing my health plan. My performance in the fight was not affected greatly although my cardio or strength may have lacked. However, because of the short time of the fight, I did not feel the negative effects .

Do I think fighter pay is low? Yes. However, I have honestly never looked into the fighter union. I do believe sponsorships are a big part of the income though and realize that it is a business based on hype and marketability.

Nutrition, faith, practice, and passion are key. Find a good gym to push you, take tough matches. Be humble in victory and defeat. Don’t get bogged down by not getting the finish you wanted. Accept, be grateful for, and learn from criticism. Have fun, live life to its fullest, and be strong!