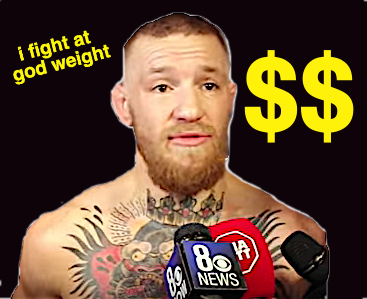 Former UFC featherweight champ and current UFC lightweight champ Conor McGregor has put his mixed martial arts career on hold while attempting to secure a MAJOR payday in a boxing match against Floyd Mayweather Jr. In the meantime, top-ranked lightweight contenders Tony Ferguson and Khabib Nurmagomedov are set to battle for the interim title at UFC 209 in March. McGregor was already forced to relinquish his featherweight belt and may be forced to do the same with his 155-pound strap if he doesn’t defend it in the near future.

A simple tweet from McGregor this week stating, “I am the ghost”, showing him in the octagon against former champ Eddie Alvarez, prompted this snarky reply from Ferguson stating that he bets Conor will “fade like a ghost” and with a hashtag suggesting that all the millions has made “The Notorious One” soft.

@TheNotoriousMMA Paper Champ Who Thought U Could Walk Away From MMA #MoneyMadeYouSoftMcnuggets I Bet You Fade Like A Ghost. #Buster #ElCucuy pic.twitter.com/v0kG8ukS15

What do you think? Has money made McGregor soft? He didn’t look too soft against Alvarez who he stopped in the second round back in November. And while it’s true he has still yet to defend any UFC belt that he has won, as a prize fighter, his eyes always seem to be on the biggest prize out there. And right now that prize seems to be a fight against Mayweather. Can you really blame him?