DJ “Da Protege” Linderman (20-11) will be traveling to Russia on February 23rd to battle one of the most dominant heavyweights in the game, unbeaten former Bellator champion Vitaly Minakov (18-0). The two will headline Fight Nights Global 59 from Ali Aliev Sports Palace in Moscow. It’s a tall task for the 33-year-old California native who is coming off a unanimous decision win over former WSOF title challenger Derrick Mehmen (19-8) at Titan FC 40 last August. But Linderman is game for the challenge and is excited about the possibility of handing Minakov his first loss. ProMMAnow.com caught up with “Da Protege” to get his thoughts on the upcoming fight.

Going to Russia and fighting is extremely hard, but fighting 18-0 Vitaly Minakov some may say victory is impossible. Rumors have that no one wants to fight this guy, how long did it take before you accepted this fight?

My manager Wade Hampel called, and before he could get Vitaly Minakov’s name out, I had to say yes, all I heard was 18-0 and that got me excited. I am a fighter, and big time fights get me excited. You know for me traveling to fight does play a factor on me, and no man can stay undefeated.

What’s your thoughts on Vitaly Minakov?

I think Vitaly Minakov has a great game, I have seen a lot of his fights, and will look to take advantage of some things I see in his game. He is 18-0, and [former] Bellator champion for a reason. I am very excited about fighting the champ, in Russia, I feel like Rocky.

What type of training will you do to prepare for this fight?

I have been watching Rocky III a lot haha!! It’s a five round fight, and I am preparing to go five hard rounds with the champ. Every round I will be pushing the pace, and see what happens. This is going to be a brutal fight, He is going to hit me, and I am going to hit him, I am expecting both of us will need a long vacation after the fight.

You have fought many of the biggest names at Heavyweight, what’s next for DJ Linderman?

I know only good things will happen with a victory. 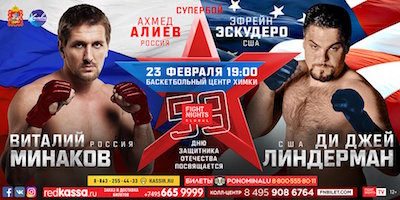