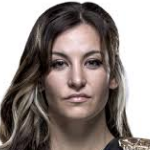 Miesha Tate retired at UFC 205 after her loss to Raquel Pennington. Her MMA record is a respectable 18-7 and she is a former UFC bantamweight champion. She recently told MMAFighting that she has no interest in improving that record or to make a run for the newly minted featherweight championship.

At this point, it’s not even on the radar, so I can’t say that will probably happen, because I don’t think that it will.

Only time will tell if she sticks to her guns. What do you think? Should she come back and try to become a champion again?