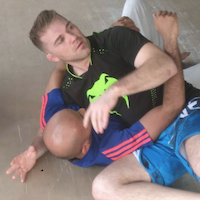 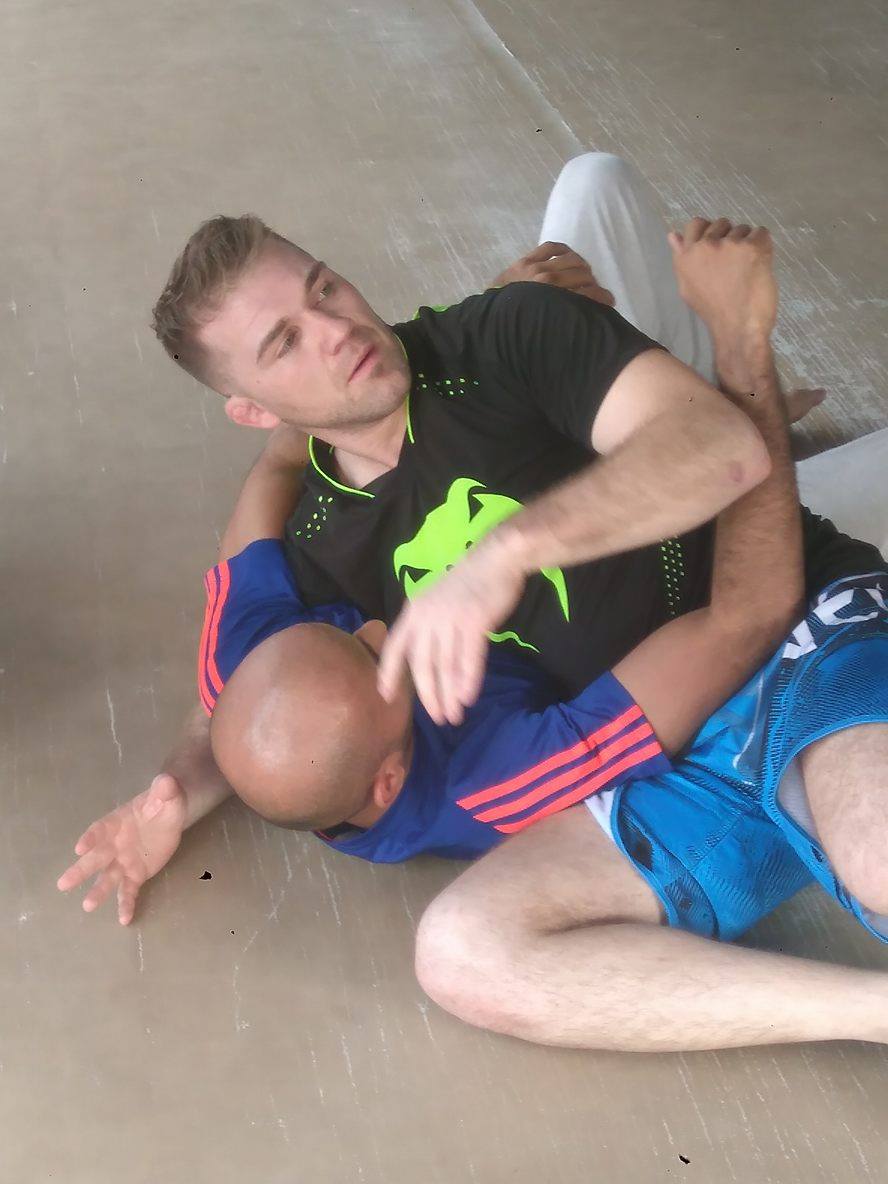 MMA in India is at its very inception. The sport hasn’t gained much of a mainstream acceptance and most fighters still need quality coaches. In their attempt to help Indian MMA grow, Superhuman Gym was back with another one of their seminars. This time they had top-ranked UFC bantamweight Bryan Caraway who was there to share his knowledge and help out the fighters. The seminar saw many regional fighters come out and to learn from one of the very best professional mixed martial artists and submission experts in the game. ProMMAnow.com resident Mumbai reporter Paarth Pande was on hand for the seminar and caught up with “Kid Lightning” as he took some time to answer a few of our questions.

How has your experience been in India with meeting fighters and experiencing a different culture?

Coming to India was a really amazing experience for me. I was really excited to come here as it has such a rich and vast culture. MMA hasn’t quite reached here but it has potential to grow so I am excited to be one of the first fighters at a high level from UFC to come over and you know try and maybe make a name for myself and introduce some people to MMA. Everybody I’ve met at Superhuman Gym have been amazing. Somesh Kamra and Superhuman Gym were very welcoming and the fighters there were very humble and hardworking. I couldn’t be more happy than to be here in India.

What is your take on Indian MMA?

MMA is still a young sport here, as it is in the world. But it’s still a baby sport here and people are still trying to catch on it. India has very good athletes, who have a strong passion it seems for mixed martial arts. They were willing to learn, they were curious and were constantly asking questions. They were eager to learn more and it was a real pleasure working with them.

What are the skills which these fighters needed to deliver on global platforms?

My take on them needing more wrestling was with respect to the athletes whom I met. There wasn’t a lot of wrestlers that I personally worked with. The ones I personally worked with had mostly striking backgrounds. That’s just my experience. But, like anywhere in the world, mixed martial arts is always growing so fast and everybody is always trying to learn new skills and better themselves. 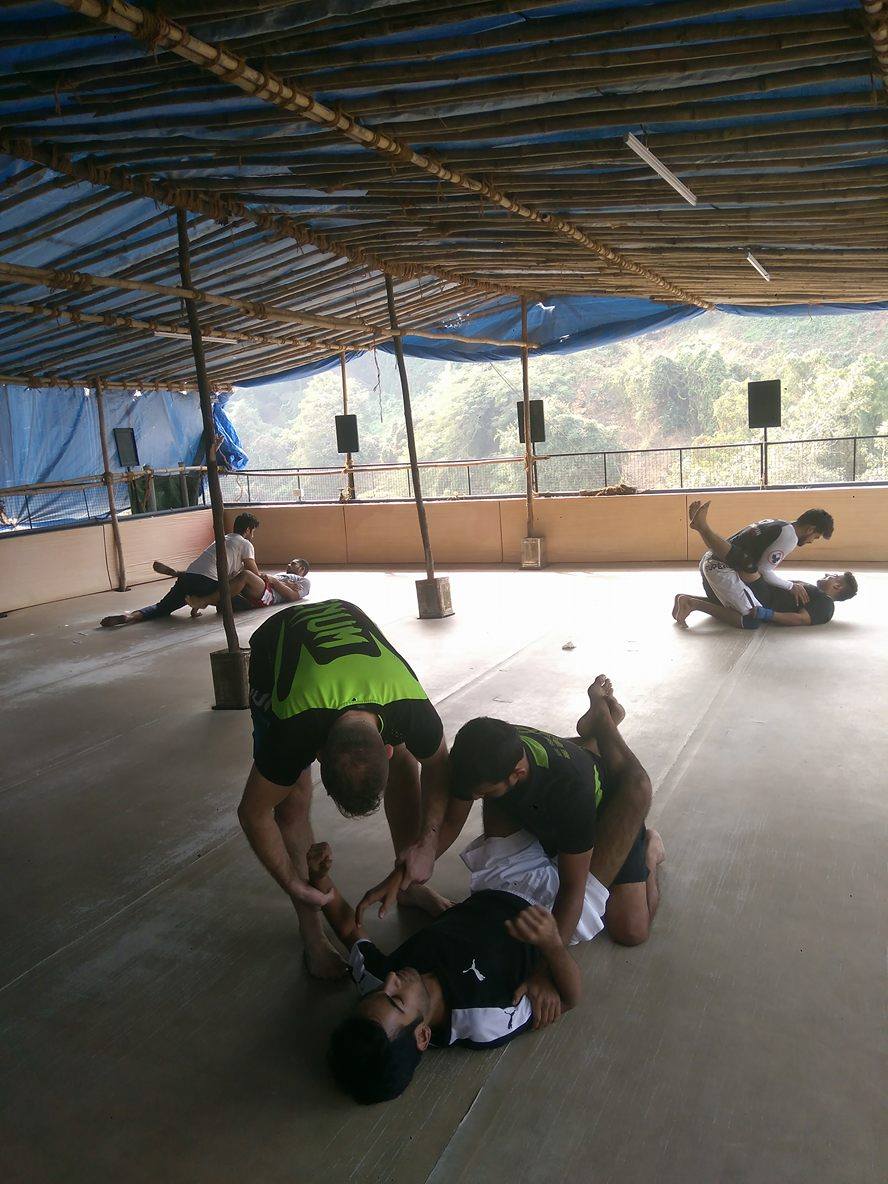 A particular problem faced by most fighters over here is that they don’t have a coach. What is your take on this situation?

Having a good coach for mixed martial arts is very important to be able to learn from, but also it is 2017 and the Internet is amazing. They have Youtube and for right now until MMA can get more established here and they can bring over more high level coaches, for all the people out there right now, Youtube and the Internet is a great avenue to learn. I’ve learned a lot off the Internet, from Marcelo Garcia to all kinds of legends. But, hopefully I’ll be able to come back here and work with Superhuman Gym more so and do some coaching myself and get to know more of the Indian culture and help out with some MMA stuff here. I hopefully can help out Indian MMA fighters and possibly stay over here for three, four, five or six months and continue to coach over here a little bit. But as of right now, I say the Internet.

You had to pull out from your fight. What exactly was the injury?

The statement about you being injured was released a bit late. When did you inform it to the UFC that you were injured?

I had told the UFC at least a month before the fight that I was hurt but I was still trying to fight. I told them I was injured but I still wanted to fight and was still trying to train but my body just wasn’t functioning. I was very injured… I had been training already four months before that. I was ready to fight in October, I was healthy. I wanted to fight John Lineker in Portland, Oregon for the main event, but for whatever reason I didn’t get to fight. I was already in a whole entire training camp. So I didn’t get that but I still stayed in a training camp. I wanted to fight Ricardo Lamas on November 5th but the whole fight fell through, so my training camp was even longer. So my camp went throughout November and December which is four full months. That is too hard on your body to be training at a high level. I was pushing my body, pushing my body, pushing my body, training for four months straight. And eventually by body gave out and I ended up getting injured twice just from pushing too long. But I told the UFC a month before that I was hurt but still wanted to fight. My training was lacking really poorly, so my coach called my manager, they told the UFC, and the UFC had me get medical attention. At that point when I got medical attention it was three to four weeks before the fight and I wasn’t healthy enough to fight.

What is your next plan?

Recently we saw Cody Garbrandt defeat Dominick Cruz to win the bantamweight title. Your take on this situation?

It was a great performance by Cody Garbrandt. He’s a young kid, very talented, I feel stylistically he had a great match, great style to beat Dominick Cruz. He is a great power puncher, great counter-striker. He was everything he needed to be able to beat Dominick Cruz. I believe styles make fights, and I believe that Cody Garbrandt has a great style for me to beat. He’s not afraid to fight, he stands in the pocket, he is heavy handed and he’s not afraid to stand there and fight. He doesn’t run away and I like fights like that. I like fights where guys will stand and fight me. I am a big fan of Dominick Cruz, I love his style but I think the better fight for me is Cody Garbrandt. So I think it bids better for me that Garbrandt won the title. Congratulations to him, great performance and I can’t wait to fight him and take his belt from him.

Cody Garbrandt claims you avoided him on one occasion. 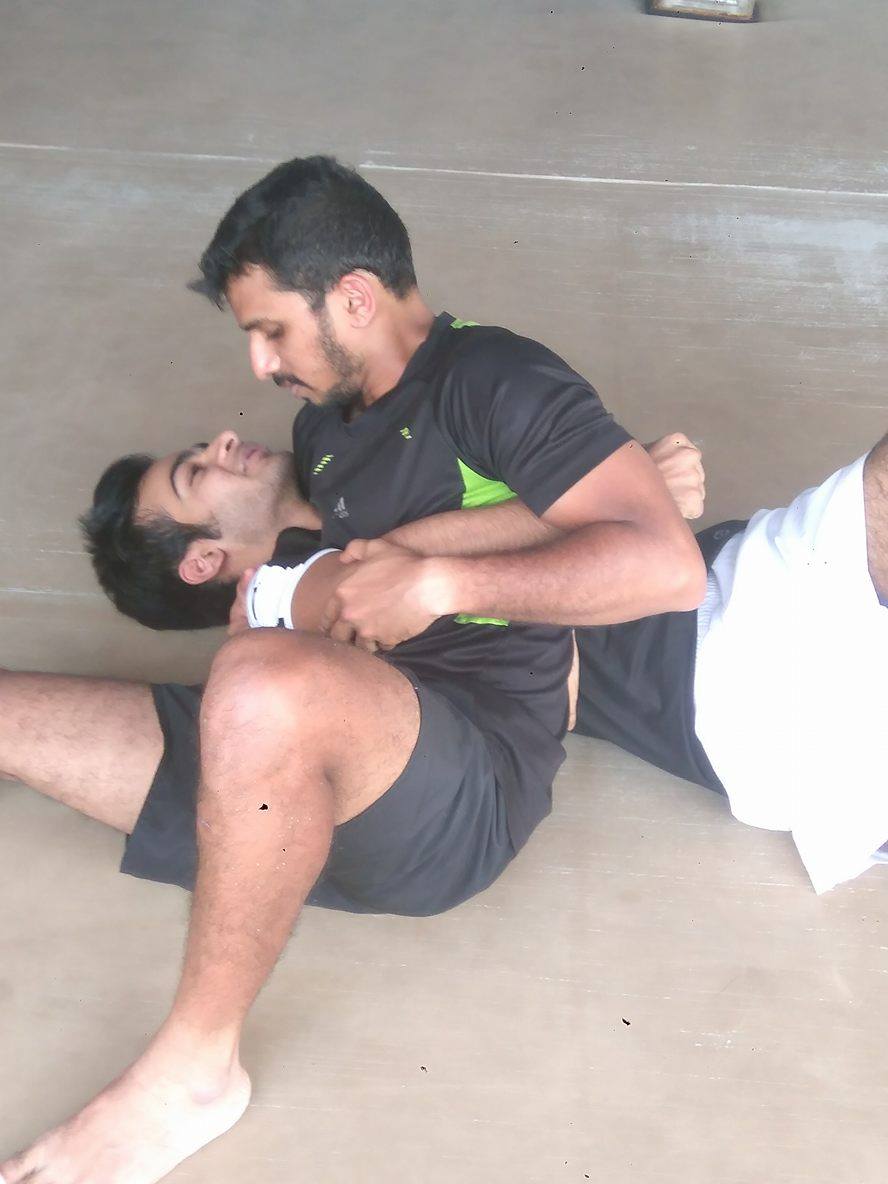 How has your stay in India been so far?

My time here in India has been amazing. The food is incredible. I love the culture. The food is so tasty, I’ve been eating everything. It’s been a great time here.

How would you describe the position of Indian MMA comparing it to the rest of the world?

I think Indian MMA is in its infancy and has a lot of room to grow. Indian MMA could be huge. They need more publicity here and more coaches that are knowledgeable like myself. They need more gyms like Superhuman Gym that is dedicated to the sport and the growth of mixed martial arts in India. There are so many people here and the sport of MMA is still so young here in India. I think the sky is the limit for India and the fighters here. There are a lot of people and a lot of talent over here but I think the sport is relatively unknown here in India and has got a lot of room for growing.

Do you think it’s possible for Indian MMA fighters to compete in the UFC and be called legit contenders in the next two to three years?

Possibly. I have only been in India for a few days, a week, so I don’t really know how many athletes are here, the caliber of the athletes. They have got a lot of people here, anything is possible. I am sure there are a lot of great athletes here that I haven’t met. And if they have a coach like myself anything is possible. Hopefully if everything works out I’ll be able to come back here and stay for a few months and coach and help some fighters out. If I can work something out with the Superhuman Gym or the UFC or something it would be great.

Most people relate you to the success of your girlfriend Miesha Tate. What is your take on that?

My take is that I have been fighting for 14 years. I am veteran of the sport. I have been fighting longer than almost anybody in my weight class in the UFC. I have over 40 MMA fights, counting my fights that are not on my MMA record. I fought many fights that weren’t on my record. I think I have earned my spot where I am at in MMA. I have beat high level guys and have one of the highest submission rates in the UFC, not only in my weight class but the entire UFC. I feel like I have earned the respect from my wins in the octagon. Yeah I was dating Miesha. I have been her coach, I also feel like I deserve respect not only on a fighter level, but also on a coaching level. I coached her to two world championships. I managed to coach her for her entire career and I brought Miesha from never fighting in MMA to fighting for the UFC world championship. So we’re a team effort. I don’t think she has anything to do with my accomplishments. I think we are both separate fighters. She has her career and I have my career. We both helped each other out, she helped me with my nutrition and my diet and I helped her out with her coaching and training. I think it was a team effort and an equal 50/50.

My message to fans is thank you for having me here and making me feel so welcome. I love all the Indian fans, the food and the culture and can’t wait to come back. I will always be a fan of India.

Thank you for your time. 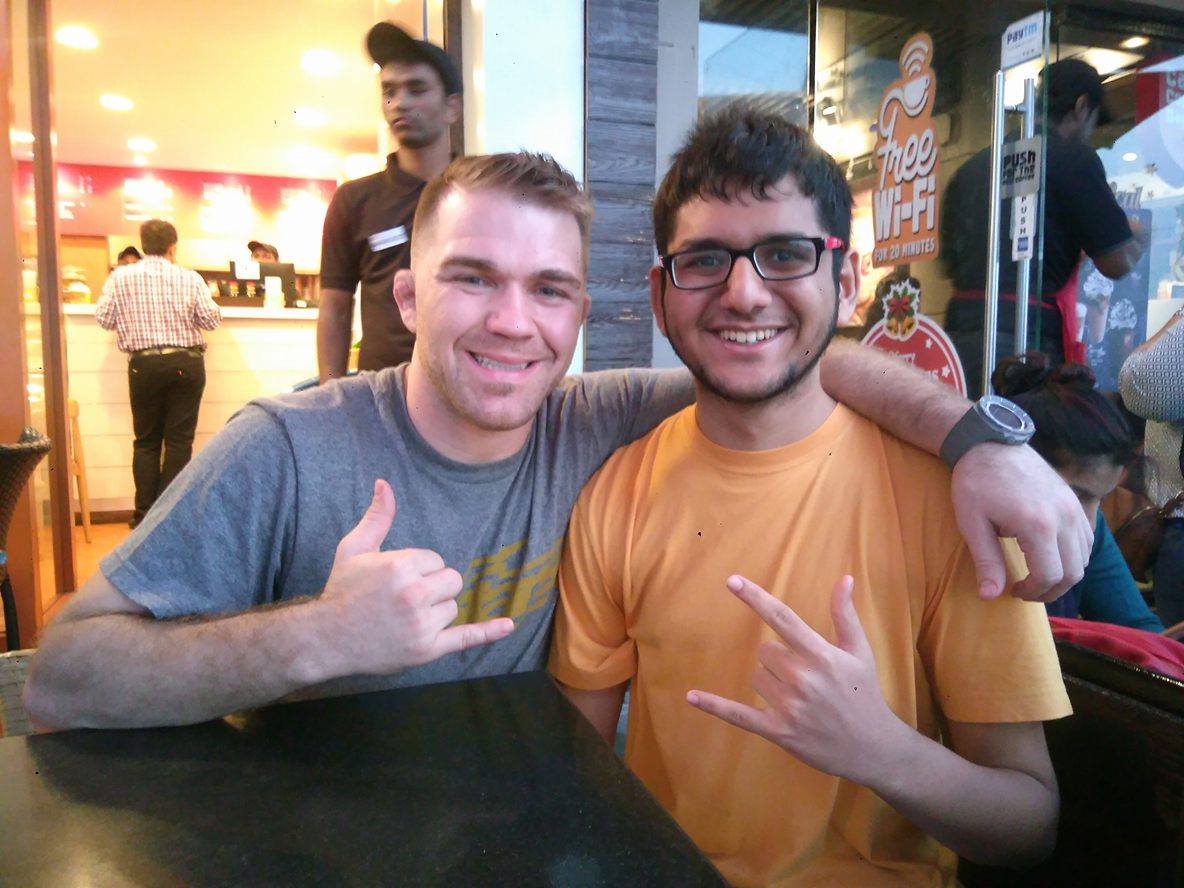