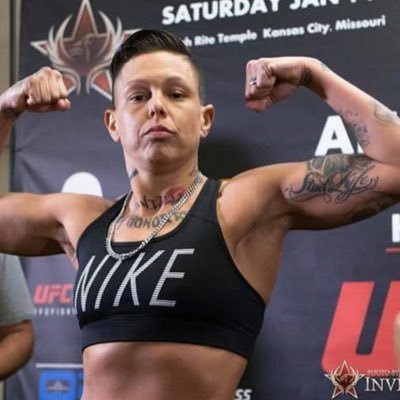 Muay Thai standout Christine Ferea made her long awaited professional MMA debut on Invicta FC 21 against fellow flyweight Rachael Ostovich. Ferea didn’t only live up to the hype around her, she moved beyond it as she knocked out Ostovich in the 3rd round by a series of punches. “Misfit” took some time to answer a few questions about her career and what has led her to this point.

I have always been athletic minded but never stuck to a sport. When I saw a fight gym I was immediately attracted to the challenge of one on one combat.

I was very interested in Cris Cyborg when I was introduced to combat sports. I was very intrigued how a female could be so strong, aggressive and dominant.

I have studied Muay Thai for 9 years solid and have been in and out of jiujitsu and wrestling about the same time. I enjoy the stand up aspect of fighting. Although I know the importance of the ground game, I have kept my mind open to practicing it as well. Just not as energetically as Muay Thai and boxing.

I don’t really think people took me seriously about wanting to make it my career. I was also 24 when I got into it so the stigma of being “too old” to take it anywhere was there. Although people humored me I know they thought I was crazy.

Who would you like to credit for your success?

First and most important my wife, family and loyal friends. Jeremy Sewell and the Sin City Vapor crew, Cliff Kosterman. Being able to train in highly skilled gyms like Xtreme Couture and Syndicate in Las Vegas, Nevada. Jason And Jessica Sargus for many things, from one-on-one wrestling, conditioning and nutrition. I do have to mention trusting and believing in myself was very important when things were not working the way I thought they should.

What challenges have you faced in your journey and what is the most difficult part about being a fighter? Also, What motivates you to move forward?

Honestly it’s been my own mental strength I’ve had to work on. Learning to follow my intuition and trust my decisions. Trying to balance gym and home life. The time and everything My wife and I have sacrificed. I can’t stop or slack now, in this game the job gets harder the more you succeed. Also knowing someone’s training to take my head off specifically motivates a lot too.

One of the most discussed topics today is fighter pay. What is your stand on the situation and what are your thoughts on a fighter union?

I think the fighter union will help level the pay. For me I am not motivated solely on money so when these promoters start to threaten or bully I don’t fall for it. Don’t get me wrong I do need to make a enough to survive and be compensated for what I put in. I only fight for respectable promoters in all ways including pay. I also believe the more the sport grows the better the pay, especially for the women.

You’re known for finishing your opponents. What is your game plan while getting in the cage?

When I fight I’m never trying hard to get the finish I let it come. I have to adjust my style sometimes so having a solid a,b,c plan is there but adjustable. Every fight is different and will require different skill set, that I am well prepared for.

UFC does not have a flyweight division. UFC president Dana White said that they might create one in near future. Will you move up to the bantamweight division for a UFC shot? Why or why not?

You hold a perfect record in both Muay Thai and MMA . Does it add pressure?

No added pressure, ever since day one I treat every fight and opponent like a championship fight and I see my opponent as the toughest one yet every time.

What is the most difficult thing about holding a perfect record?

Nothing difficult about it I always expect the best out of myself regardless of my record or status. I do this because it saves my life, I am grateful and I appreciate what it has saved me from.

What are your thoughts on the champion Jennifer Maia?

Nothing. She is a champion I respect her for that. No comments.

If you’re a true warrior you know it deep down. Train for everyone as if they are the best in the world. Stay humble. Believe in yourself.