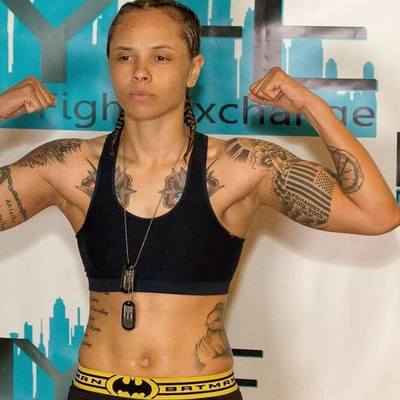 Before Sarah “Switch Kick” Click returns to action for the third time as a professional versus Maria Rivera at CES MMA 41 on Friday in Lincoln, R.I., the hard-hitting strawweight prospect sat down with Pro MMA Now.

(Laughs) Hell yeah, absolutely! I’ve always been really athletic; I played softball from 7th grade into college before my deployment. I played basketball all the time as well, but I always felt like there was something else I’d be a lot better at — and that just happened to be fighting. My mother started me in Tae Kwon Do when I was 4. I did all types of different stand-up growing up and finally found Mike “Loco Lobo” Gresh when I was 16, and have been doing Muay Thai and Brazilian jiu-jitsu ever since.

How were you introduced to MMA in the first place?

Before my deployment to Afghanistan I did Level One Army Combatives, which is pretty much the Army’s MMA program, and I had all the tools I needed to be good at it. When we got back, everyone dealt with being home in their own way. I became very reckless and decided that I should put everything into fighting. MMA became the best medicine for everything that comes with being back from a deployment in a combat zone.

Did you fall in love with the sport right away?

I love MMA as much as I love being a soldier. Those were the two things I know I was meant to do in life.

I live for fights. The road is hard; training camps suck at times. There is literal blood, sweat and tears that you and your training partners put into preparing for a fight and all of those months of hard work come down to 15 minutes in the cage.

How do you see Friday’s fight playing out?

I see this being a very entertaining fight. I know I’m going to hit her hard with everything I have. I know I have no choice but to keep moving forward and putting the pressure on her the whole fight. I see me winning. I’ve worked too hard and have too much to lose not to.

Where would you like to be 12 months from today?

If everything goes perfectly, of course I see myself in the UFC or the Invicta strawweight champion.