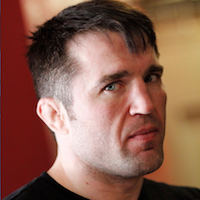 Chael Sonnen has not been having a good week. Not only did he get tapped out by Tito Ortiz at Bellator 170 Saturday night, but on Monday “The Bad Guy” lived up to his monicker once again and got fired from “The Celebrity Apprentice” by none other than “The Governator” Arnold Schwarzenegger — who replaced original boss Donald Trump on the show while he’s out pissing off half the world with executive orders as newly elected U.S. President. So, why did Chael get fired? For cheating! His team was running out of time on their project so he took advantage of one of the rules which states only technical difficulties could allot the team more time. So what did he do? He created a technical difficulty of course.

Chael thought his creativity should have been applauded. The Governator disagreed:

“Chael, I know that you think this is a gray area, but in my world, this is not a gray area. I will not tolerate cheaters in my boardroom. You’re fired.”

Who knows if any of this is even real though. TV is all about ratings and some like Dan Hardy might say it looked as staged as the fight against Tito. We’re not saying that mind you, but some might.