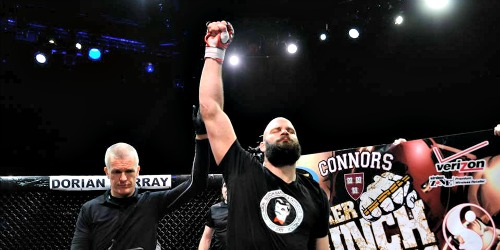 Is there anything special about this fight, or is it just business as usual?

There’s definitely nothing special about this guy, but he opened his mouth, saying he can do something to me. I was like, “Dude, you lost three in a row. Who are you?” I don’t make guys famous who have lost three in a row. But CES has been great to me, and they needed someone to fight this bum, so I’ll do it. Easy win.

Why has he been talking about you?

I have no idea. He says I’ve padded my record. Motherfucker, I’ve fought all the toughest guys in New England. I’ve fought all the best guys that have been put in front of me. World Series of Fighting brought their hottest prospect and I whipped his ass, all right? I dominated Josh Diekmann and put him to sleep. What the fuck is Keith Bell going to do to me? Keith Bell gives up — he’s tapped to strikes. That’s a pussy way out of the fight. He’s not tough. I’m going to make an example out of Keith Bell.

How do you win this fight?

I have many different ways to win this fight! I can choke him out, I can put him on his back and beat him down, I can TKO him. I can take him out standing up with anything in my arsenal. The only chance he has of winning this fight is clipping me, and that is it. He has nothing else in his toolbox.

Are you pumped up more than usual for this fight?

I’m pumped to get this win, get paid, and move on.