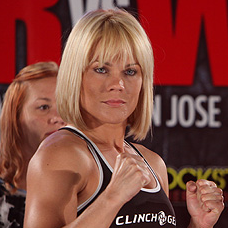 Thirty-six-year-old women’s MMA veteran Jan “Cuddles” Finney has been in the cage with some of the sport’s best including former UFC women’s bantamweight champions Miesha Tate and Holly Holm, as well as Strikeforce and Invicta FC champ Cris Cyborg.

Having been competing inside the cage for over a decade now, Finney will return to action on Nov. 5 when she rematches Michigan’s Allanna “Hands of Stone” Jones at STFC 40 in Mcallen, Texas. Finney’s manager, Wade Hampel, confirmed news of the matchup with ProMMAnow.com over the weekend.

Finney and Jones first fought in Nov. 2015 when Finney scored a unanimous decision victory over Jones at Alpha One Sports: IT Fight Series 38 in Ohio. This time Finney wants to finish the 30-year-old American Muscle MMA product.

Speaking about their first matchup, Finney said, “It was pretty much a kickboxing match, with a lot of striking. I won the decision, but will be training hard to keep the judges out of this one.” Asked her thoughts on “Hands of Stone’s” skills, she said, “She is really tough, with great boxing.  She has also has fought a man, in pro MMA and did really well against him.”

We’re not touching that one.

Finney said she is currently training with Scott Sheeley Iron Tiger Fight Team, and when asked about her future goals in the sport, the veteran stated she wants “to make Conor McGregor money”.