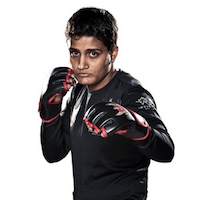 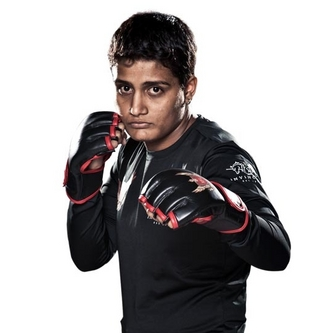 MMA is not a known or popular sport in India. There are a 1000 reasons for that but one of the most important reasons is the lack of a super sport icon for the combat sport. Every sport has that one strong and famous icon which moves every person, irrespective of the fact whether they watch that sport or not. It’s that one personality who we all look up to and aim to be as good as one day on some level.

Though MMA fans have celebrities like Ronda Rousey and Conor McGregor to look up to, they are not really very popular in the East; of course MMA fans do know them but they are not really popular with the masses. Now something that Indian MMA needs is a true icon, a true leader who can represent Indian thoughts and at the very same time can be a strong fighter in the cage. And as Indian MMA fans desperately looked for a that one knight in the shining armor, God answered their call. Well he did not give them a knight, he gave them something way better, someone true, tough, strong and deadly. God gave them Manjit Kolekar.

Manjit Kolekar started her career in 2012 and is currently 8-0 as a professional. Since her debut she has been unstoppable and has produced vicious submissions and a slew of knockouts. She has shown a beautiful game which involves calculative striking and a super ground game at the same time. The first woman of Indian women’s MMA is set to make her debut in Invicta FC on July 23, 2016, at Invicta FC 18 and here are some reasons why fans as well as the promotion alike should be excited about it.

What a honor to be the first Indian fighter to fight under the @InvictaFights banner! #InvictaFC18 #itsmyturnnow @TwitterIndia @ESPNMMA

She is a true inspiration

Manjit Kolekar is a true inspiration to every person out there. She took a sport like MMA and showed it to everybody that women too can fight. Now most of you must be thinking what is the big deal if a woman takes MMA as a career, but Indian society is male dominated and sports like boxing, MMA, wrestling etc. are considered as something only men can do. As Manjit walks into the cage she proves all these doubters wrong and creates an impact on many young girls out there. Apart from that Manjit is an exceptionally good fighter and her skills in the cage are unquestionably good. She has time and again shown that she can produce very good fights. As she steps on an international platform such as Invicta FC she can attract main stream attention and can go on to be one of the many females who young Indian girls can look up to.

She is an amazing fighter

Manjit is undefeated and holds a super record of 8-0, out of which 6 came by stoppages. She has thrashed her opponents brutally in the cage. She made her MMA debut on Oct. 19, 2012, in Super Fight League and won her maiden match with a second round TKO. She again showcased her talent when she stepped in the SFL for the second time, this time the fight went to the ground and Manjit forced her opponent to tap as she finished the game in the very first round. This was followed by another knockout win.

Her first major victory came when she became the first Indian MMA fighter to defeat a foreign MMA fighter as she knocked out Mona Mounir Mohamed at SFL 15. She has time and again proven that she has what it takes to be a top contender, and when she gets a stage she will prove to people that she can shine.

She can be the star Indian MMA needs

MMA in India desperately needs a celebrity and Manjit has everything it takes to be that representative. Her swag with Mumbai’s famous thumka, her looks and of course her super fighting attitude all make her a star in the making. She has the rebel spirit and the style to take on the entire world. These all facts that could make her a super idol and basically make sure she is someone who we can follow.

Let us all join the effort of the “First Lady” of Indian MMA, as she steps in the Invicta FC cage.

Remember all women must fight,

Let the game of belts begin.

2 thoughts on “Manjit Kolekar: a female deity in the making”