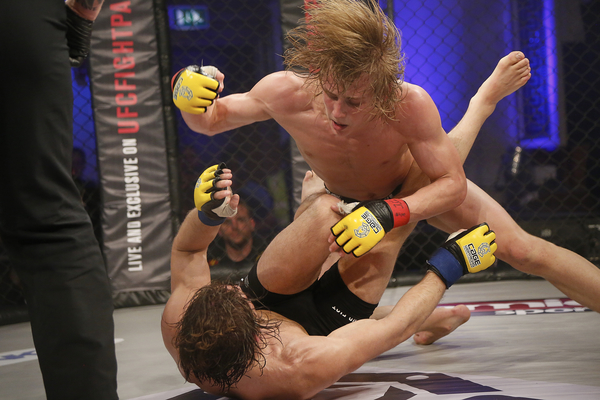 British fighter Paddy “The Baddy” Pimblett (10-1) is one of the most promising featherweight talents on the UK MMA circuit today. He’s currently riding a six-fight winning streak and will no doubt look to extend that to seven with a win over Teddy Violet at CWFC 77, which takes place at the Camden Centre in London, England, on July 8.

Pro MMA Now (www.prommanow.com) reporter Jay Cee recently caught up with Paddy to discuss the upcoming CWFC 77 bout against Teddy Violet, training and his goals for the future!

Pro MMA Now: Hi Paddy, great to have you on ProMMANow.com. You’re scheduled to face Teddy Violet at CWFC 77 on July 8th. What are your thoughts on Teddy as an opponent? Have you watched any of his past fights?

Paddy Pimblett: He’s a good tough opponent, I can’t take nothin away from him, he’s also battle tested but I’m just gonna have too much for him in every area. I was meant to fight him in October last year, I was gonna finish him in a round or two then, nothing’s changed.

Pro MMA Now: Tell me how your fight camp is going? Have you been working with any special training partners in preparation for Violet?

Paddy Pimblett: Fight camp is going great, as always. I’ve got the best coaches and training partners around me at Next Generation UK. We’re more like a family to be honest and I don’t need any special training partners for this fight, I train with fighters much better who can do his style with ease.

Pro MMA Now: Can you see this fight going the distance or will you be looking for a quick finish?

Paddy Pimblett: A quick finish. I saw Tom Duquesnoy make him quit, I’ll do it even faster.

Pro MMA Now: Four of your ten pro MMA wins have come via submission. Do you see the fight against Violet ending with a sub or would you like to get the job done on the feet?

Paddy Pimblett: I don’t know where it’ll end, that’s the beauty of MMA, you never know. But I do know I’m gonna get the finish and it’ll be however I feel like when I get in the cage. If I wanna stand and knock him out I can, if I wanna take him down and sub him I can also do that, the ball’s firmly in my court.

Pro MMA Now: You mentioned that you’re still training over at Next Generation UK. Tell me about some of the coaches you work with?

Paddy Pimblett: Yea, everyone knows I still train at next gen. I wouldn’t go anywhere else. We’re the best gym in the country, it’s that simple really.

Pro MMA Now: During 2015 you fought twice for FCC (Full Contact Contender), picking up wins over Kevin Petshi and Miguel Haro. Give me your thoughts on FCC as a promotion? Can we expect to see you fighting for them again in the future?

Paddy Pimblett: FCC were good to me, they got me the fights I needed when there weren’t many shows about. I’ll always appreciate Adam Teh for that, but I think after this one I’m surely getting signed, if not, someone’s got it out for me! Hahaha!

Pro MMA Now: I know your current focus will be on defeating Teddy on July 8th, but what’s your main goal for 2016?

Paddy Pimblett: I’m gonna take it one step at a time. At the moment it’s Teddy Violet, I’ll make a show of him, prove where I belong and get signed by the UFC, then I’ll show everyone how great I really am, people don’t understand the places I’m headed…Hahaha!

Pro MMA Now: Thanks for taking the time to speak with me Paddy. I appreciate it. Good luck for the future and I look forward to seeing you in action at CWFC 77 on July 8th.