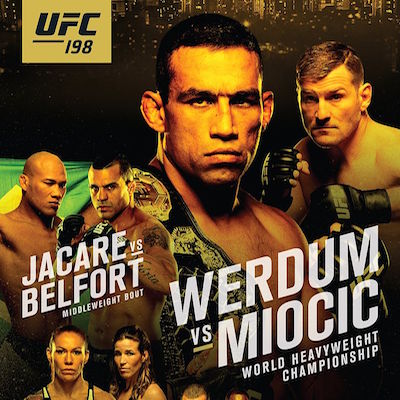 UFC 198 takes place this evening in Curitiba, Brazil. Fabricio Werdum puts his heavyweight title on the line against Stipe Miocic in the main event, while legend Vitor Belfort faces the very dangerous Ronaldo “Jacare” Souza in the co-main event. Also, Cris Cyborg makes her long-awaited UFC debut against Leslie Smith. All this and more.

Stick with us here at ProMMAnow.com for live results of all the action, as well as round-by-round updates of the televised prelims and pay-per-view card.

Round 1 – Lineker got the better of the standup, got a takedown near the end of the round, landed ground and pound. As Font got back up Lineker chased him down the remaining seconds. Lineker 10-9

Round 2 – Lineker with some heavy leg kicks early on. And some nice punch combos. Font trying to circle on the outside but keeps getting cut off. Font landed the occasional strike and a brief takedown but Lineker’s output was much higher. Font did land a nice hook kick at the end of the round. Lineker 10-9

Round 3 – Lineker continues to hunt Font down with punches and gets a takedown with some ground and pound at about the 3 minute mark. Knees to the body before Font escapes to his feet. Lineker catches a kick, counters with a right and dumps Font to his back for more ground and pound. Font gets to his feet in the final minute. Lineker backs him to the fence with punches, he goes down, Lineker briefly looks at a guillotine and ends on top. Lineker 10-9

Round 1 – Trinaldo looking for the takedown early but they end up against the cage for a couple minutes where they trade knees and jockey for position. Back to the center. Low kick from Trinaldo and then he starts scoring with some hard punches as we enter the final minute. He hurts Yancy with a couple big left hands. Yancy tries to clinch up but Trinaldo is going for it, lands several big shots and a hard knee at the bell. 10-9 Trinaldo — but he may have worn himself out a bit trying to finish.

Round 2 – Trinaldo starts landing those big punches again about a minute in. But Medeiros still in there and lands a couple rights of his own. Trinaldo starting to take some deep breaths. Nice body kick from Trinaldo. Body kick from Medeiros who seems to be gaining confidence. Clinch knee from Trinaldo as Medeiros shoots in. Stuffed, and Yancy eats a head kick, then a right, and a left over the top from Trinaldo. Hard right to the body from Yancy. Trinaldo getting a bit sloppy. Hard right from Yancy puts Trinaldo down. He eats several shots as he tries to hold on. Medeiros 10-9

Round 3 – Hard inside leg kick from Trinaldo. Yancy walking him down Diaz style. Leg kick from Trinaldo. Yancy catches a kick and lands a body shot counter. Body kick from Trinaldo smacks hard. Big overhand left follows and he hurts Yancy. Trinaldo backs him to the cage with more big left hands, huge body shot. Yancy wants more, tells him to bring it. Trinaldo batters him until he goes down. Trinaldo gets on top with ground and pound and hard elbows. 2 minutes to go. Yancy somehow gets up and the referee just watches as he stumbles around, basically out on his feet and taking severe punishment. Trinaldo gets him back down but somehow Yancy sweeps him and ends on top. I thought the fight should have been stopped. Yancy was out on his feet and even though he got back on top I thought he took too much damage. 10-9 Trinaldo

Round 1 – Nate looking pretty good but gets dropped with a left at about the 2 minute mark. He gets back up but Thiago lands a nasty body kick and a left hand that puts Nate down face first and out. That’s 7 first round finishes and a huge win for Thiago Santos.

Round 1 – Matt trying to draw him in with his hands down. Maia shoots, pushed aside. Maia shoots again and gets Matt down against the cage. Matt gets to his feet against the cage but Maia has him around the back with one hook in. Both hooks in now while standing. Maia drags him down and now has him locked up in a leg triangle. Maia looking for the RNC. Matt is able to finally spin around and get top control with about 30 seconds left but Maia controlled the whole round. Maia 10-8

Round 2 – Brown stuffs the first takedown attempt but is unable to defend the one that comes right afterward. Maia is on his back again with both hooks in as Brown gets back to his feet. Maia gets him back on the ground, still on his back with a body triangle locked on. Brown wants it stood up but ref isn’t buying it. Maia continues to try and soften him up with punches from the back, still trying to set up the choke. Some nice elbows from Maia. Brown ends up on top in the final seconds but once again was dominated. Maia 10-9

Round 3 – Maia hunting for the takedown. Matt stuffs about three attempts in the first 30 seconds, defends another and lands a hard shot on Maia. But Maia goes for another but ends up on his back with Brown on top, but Maia gets a reversal and controls from the top. 3 minutes to go. Brown gets to his feet but Maia takes his back once again with a body triangle. Complete domination. Maia looking for a neck crank now. Matt survives it. After a few moments Maia gets it under the chin and Brown taps before he goes out.

Round 1 – Alves hops on a guillotine within the first 20 seconds of the round. Barberena pops his head out and is now in top control on the ground. Alves gets back to his feet and just misses a wheel kick. Low kick from Bryan. High kick and right from Alves. Clinch elbow from Barberena. Some nice body shots from Alves, uppercut. Two hard body kicks and an uppercut from Alves, then a head kick. Barberena with a low kick that drops Alves briefly. Alves backs him to the cage, eats a couple elbows though. Alves backs out from the clinch with 30 seconds to go. Alves 10-9

Round 3 – Body kick and low kick from Barberena. … Trading kicks. Barberena touches him up with a nice body/head combo around the 3 minute mark. Barberena using nice elbows in the clinch. Alves backs him to the cage, knee to the body. Right over top on the break from Alves. More punch combos from Barberena but Alves still there. Barberena lands a couple nice left hands. Stiff jab from Alves and they’re slugging it out as we enter the final minute. Barberena with massive punch combinations as Alves looks for the bomb. 10-9 Barberena

Round 1 – It’s interesting that Shogun is still ranked in the top 10 after all these years. Shogun pressing. Corey circling. Corey looks longer and lighter on his feet. Shogun eats a right counter. Shogun targeting the legs early. Uppercut from Shogun. 45,000 Brazilians are chanting for Shogun right now. That has to be intimidating. Right uppercut, right low kick combo from Shogun. Jab from Corey. Bit of a scramble, Corey looking for the takedown against the cage. Unable to get it. Back to the center. Low kick and a left hook from Shogun. Corey with a body kick. … Left hook. Hard low kick from Corey and a stiff jab. Low kick from Shogun. Double jab from Corey but he gets countered and rocked. He goes down and Shogun tries to finish but time is up. 10-9 Shogun

Round 2 – Slapping low kick from Shogun. They trade low kicks. Corey with a punch combo, and then a takedown as he ducks under Shogun’s punch. Anderson postures up with a big right but Shogun scrambles to his feet. Corey with a jab, then shoots for the single but is stuffed. … A minute or so later he scores a takedown but Shogun bounces right up. 1:00 mark – Corey has great economy of movement… but Shogun lands two right hands that drops Corey at the end of the round. 10-9 Shogun

Round 3 – Corey muscles a takedown at 3:50. Shogun wraps him up in full guard. Corey drops a couple elbows. Shogun escapes to his feet around 2:20. Couple jabs and another takedown attempt from Corey. He keeps working for it but is unable to get it. 10-9 Anderson

Round 1 – Both girls taking their time, Cyborg already landing some hard shots. High kick. She puts Leslie down with a body kick followed by a barrage of punches pretty quick and they stop it due to knockout. That’s it. Both of Leslie’s eyes are blackened as she sits up and they tend to her. Cyborg goes and checks on her and gives her a kiss or two. … Leslie doesn’t think it should have been stopped it seems.

Round 1 – Such an interesting match. Body kick from Jacare. The bearded Belfort goes for a jumping knee, Jacare tries to shoot in but Vitor defends. Jacare pushes him to the cage, knee from Vitor to the body. Vitor breaks out to the center. Jacare pressing. Vitor feints the flying knee, Jacare then scores a takedown fairly easily. Elbow from Jacare from half guard. He lands another couple and Vitor is cut open now. Jacare postures up with punches. Ref halts the action to let the doctor check Vitor out. … They restart it with Jacare on top, gets to side control. Vitor springs up as Jacare goes for an armbar. Jacare pushes him to the cage. Vitor pulls guard, lands a couple up kicks but is eating some hard ground and pound. Elbows and punches from Jacare from full mount now. Vitor squirming and trying to cover up but the ref finally stops it. Textbook performance from Jacare.