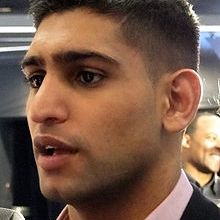 Sports fans with a particular interest in MMA betting odds will be chomping at the bit in response to hints dropped by Amir Khan that he might make a switch to MMA.

News such as this probably wouldn’t have attracted so much attention if Amir Khan wasn’t a mere seven days from the biggest fight of his boxing career. According to the boxing professional, he has the talent and the speed to thrive in the Mixed Martial Arts field, refusing to rule out the possibility of a switch from boxing when questioned about his future.

Presently, Khan is preparing to face off against Saul “Canelo” Alvarez for the WBC Middleweight Crown. During an interview with the Guardian, questions about the 29-year-old’s fight with the Mexican star on Thursday took a backseat when Khan hinted that he might be willing to trade the ring for the octagon at some point in his future.

Khan also made mention of Super Fight League, an MMA company in India in which he has a stake and which has had a lot of shows in Dubai. Whether or not Khan is being driven towards MMA because of his personal and financial connection to the Super Fight League is difficult to determine.

IN making the switch, though, Khan wouldn’t be the first boxer to turn his attention to MMA. According to many an analyst, MMA, and boxing, while different in a technical sense, share a lot of traits and it isn’t so surprising that boxers would choose to make that leap and take their skills to a new, possibly even more challenging stage.

MMA has gained considerable notoriety in the last few years. According to Khan, the Super Fight League is making plans to move into America. This move would provide Khan the perfect opportunity to try his hand at the fighting sport without upending his life and moving to India.

The biggest names in the MMA industry are Bellator and UFC. Khan believes that the Super Fight League is a powerful contender in the arena, possibly even falling into third place behind Bellator and UFC.

Amir Khan has admitted to being a massive UFC Fan, having followed the sport during its less than inspiring years and taking to Conor McGregor’s approach to promotion with a lot of fervor.

Amir Khan isn’t completely dismissing the opposing voices surrounding his possible switch to MMA, many of which doubt his ability to successfully integrate into the sport.

The boxing star is, none the less, certain of his abilities, confident in his chances if he was to fight the champion around 147lb. Khan isn’t making any definitive plans, though, at least not until he achieves the apex of his career as a boxer.

There are plenty of boxing opportunities waiting for him, starting with his cross-division bout with Alvarez. Khan won’t be throwing his gloves away anytime soon, not while there is still so much that he can do as a boxer.

While the future remains largely uncertain for now, Khan isn’t saying ‘no’ to the possibility of eventually venturing into MMA, not with all its prospects for glory.