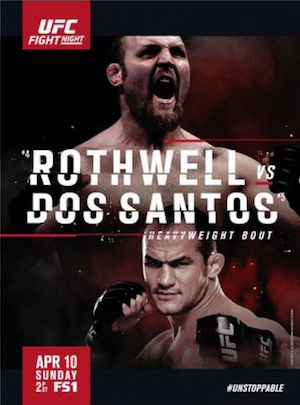 Man, what was Ben Rothwell doing? The guy who was on a four-fight stoppage winning streak and who gogo choked Josh Barnett back in January to become the first person to ever stop the former UFC heavyweight champion via actual submission — looked absolutely stumped against Junior dos Santos.

The two squared off in the UFC Fight Night 86 main event Sunday in Zagreb, Croatia.

Rothwell got into a pattern he couldn’t shake. The lumbering giant took a beating from dos Santos, who like Barnett, is also a former champion. Junior stayed mobile with his footwork and active with his punch combinations. FS1 broadcast commentator Brian Stann said Rothwell needed to “get weird” if he was going to make something happen to throw JDS off his game. He never did.

Big Ben’s face looked a mess as the bout entered the fifth and final round. His eyes were swollen and blackened, his face busted up and nose bleeding. It’s quite remarkable this fight went the distance as both guys landed some really hard shots. The only real knockdown though was a front kick from JDS that sent Ben flying across the cage.

Ben could not really find his range or rhythm and tended toward a defensive mode later in the rounds. JDS circled Rothwell and worked the body throughout the fight and that slowed the attack of the 34-year-old Kenosha, Wis., native.

Rothwell’s best chance seemed to be on the ground but he was unable to get the fight there, nor was he able to clinch up long enough to do much damage or get a trip. Much credit goes to JDS for sticking to his game plan by not getting pinned to the cage or getting into wild exchanges with the 15-year veteran. In the end all three judges gave all five rounds to dos Santos via unanimous decision.

Other notes: I don’t want to see Gabriel Gonzaga KO’d anymore. It’s too much. Derrick Lewis obliterated him and that dude’s power is very scary. He’s knocked out his last three opponents now and should get a top 10 opponent next. There were a couple other good T/KOs on the card as well. Only two submissions and one was verbal.