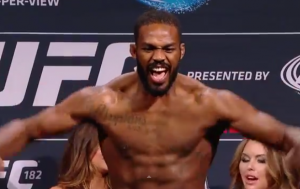 The UFC 197 PPV has a new main event. UFC officials have announced that Jon Jones will take on Ovince St. Preux for the interim UFC light heavyweight title.

The original main event between Jon Jones and current champion Daniel Cormier was scraped when Cormier suffered a leg injury.

“Jon has never lost his title in the Octagon. He was stripped of his title because of problems outside. It was the right thing to do, he will fight for the light heavyweight interim title,” White said on SportsCenter Saturday night.

Jon Jones (21-1) hasn’t fought since beating Cormier in this first battle in January 2015. Jones ahs been dealing with multiple legal issues in his time away from the cage, including a violation of probation earlier this week after receiving a ticket for drag racing.

Ovince St. Preux (19-7) is coming off a unanimous decision win over Rafael Cavalcante in his last outing in February 2016. St. Preux is 3-1 in his last four bouts.

UFC 197 will take place on April 23 at the MGM Grand Garden Arena.