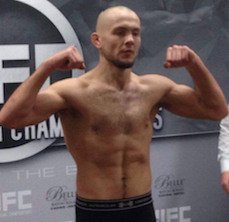 Nolan Norwood has a fight on his hands.

The well-rounded Little Rock, Ark., product will return to action against UFC veteran Kevin Nowaczyk (18-3) for Hoosier Fight Club on April 30 in Indiana.

Norwood brings a 9-3 record to the bout, winning five of his past six fights — most recently notching an impressive submission win over four-time UFC vet Kyle Bradley. The Westside MMA welterweight is happy with what he’s accomplished so far, but he certainly isn’t satisfied.

In April’s action, he’s looking to make a statement with a big win over his second UFC veteran. He appreciates the opportunity, but insists it will be business as usual when the cage door locks.

“It’s a big opportunity, but I do better under pressure,” says Norwood, the proud owner of eight stoppage wins. “He has a bigger name than a lot of my opponents, but that doesn’t change my job for the night.”

“I don’t know how,” Norwood says with a laugh, “but I’m going to have my arm raised up in the end.”