Should Frank Mir Retire After KO Loss to Mark Hunt? 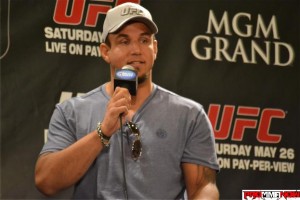 UFC heavyweight Frank Mir is arguably one of the best heavyweights in the history of MMA. He’s a two-time UFC heavyweight champion and has two wins over the likes of heavyweight great Antonio Rodrigo Nogueira and a win over Mirko Cro Cop.

He overcame a horrendous motorcycle accident where many didn’t think he’d ever fight again.

However, Mir was knocked out for the eighth time in his professional career on Saturday night. A first round walk-off KO against Mark Hunt. There’s no shame in getting knocked out by Hunt, he has devastating KO power.

However, it just may be time for Frank Mir to hang up the gloves. He’s (18-11, 14 finishes) and will be 37 years old in May. What does he have to prove in the sport of MMA at this point? He’s made plenty of money and hopefully he has saved some of it. If not, he could certainly become an MMA analyst since he has experience doing it.

Retired fighter turned MMA analyst Brian Stann agrees with that notion and talked about it during the FOX Sports 1 post-fight show:

“Frank Mir has absolutely nothing left to prove in this sport. He won the heavyweight title twice. He’s one of the all-time greats. People could argue he’s the best heavyweight we’ve seen in the UFC because of the legacy he has.”

Stann was asked if he would like to see Frank Mir fight again:

“I don’t. Everyone knows when they’ve seen me analyze sports, I’m really on the cautious side when it comes to retirement and putting yourself at risk. I think Frank Mir, the minute he retires, is an automatic induction into the Hall of Fame. I would like to see him put a suit and tie on, come behind this desk, because he’s forgotten more about this sport than most analysts will ever know.”

Mir had won back-to-back fights by KO before losing his last two fights. He’s (2-6) in his last eight bouts with three losses via TKO. Should Frank Mir hang up the gloves?