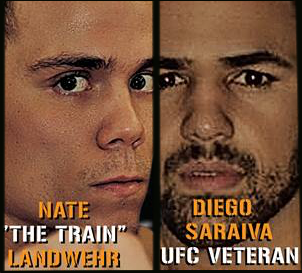 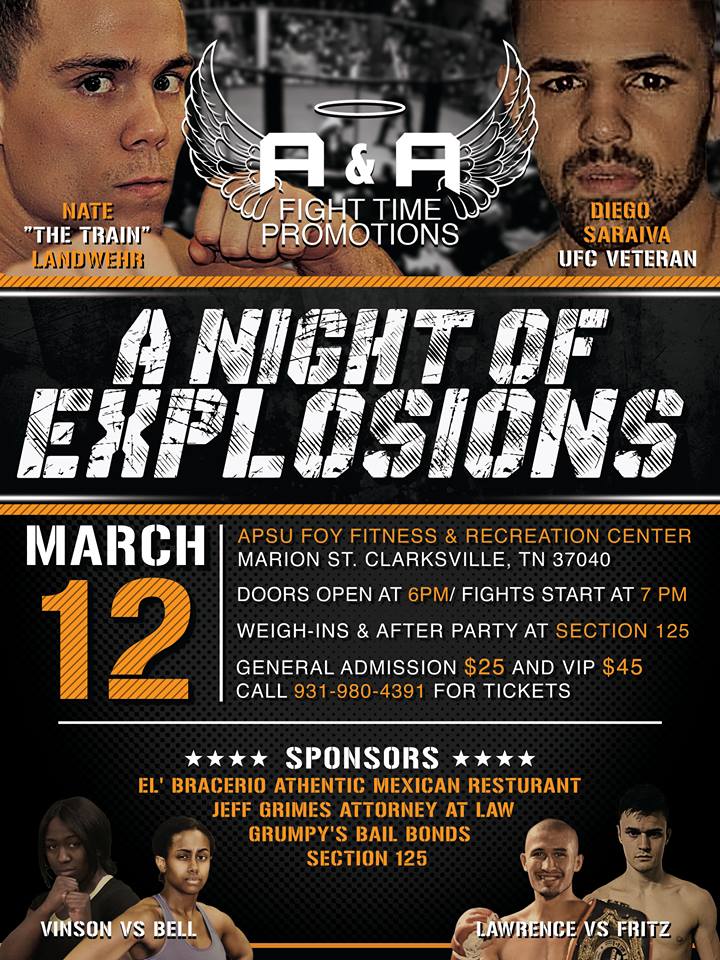 CLARKSVILLE, Tenn. — Clarksville’s own Nate “The Train” Landwehr will return to action in front of his hometown fans on Saturday, March 12, when he faces UFC veteran Diego “the Octopus” Saraiva in a featherweight main event at “A Night of Explosions” presented by A&A Fight Time Promotions at Austin Peay’s Foy Fitness and Recreation Center.

Landwehr (6-2) may have his hands full against the 42-fight submission specialist out of Brazil. Saraiva (22-19-1) has finished 13 opponents via submission and has been in the cage with the likes of Dustin Hazelett, Jeremy Stephens, Jorge Gurgel, Melvin Guillard and Benson Henderson.

In 2007 Saraiva dropped a trio of decisions in the UFC Octagon, but was awarded “Fight of the Night” honors in a three-round war against Gurgel. Following a unanimous decision win in a rematch against Eddie Yagin at Tachi Palace in June 2014, Saraiva has dropped his last three, most recently a decision to Jordan Rinaldi last Summer.

Fighting out of Atlanta, Saraiva has spent much of his career in recent years fighting on Wild Bill’s Fight Night cards in Georgia, where many a Southeasterner has cut his proverbial teeth. The 33-year-old BJJ black belt also runs Team Octopus in the ATL area where he is an instructor.

Landwehr burst onto the professional mixed martial arts scene in a big way when he debuted in the XFC in 2012, knocking out Billy Mullins in June, then Ovince Saint Preux’s training partner Chris Wright three months later.

After a decision loss to D’Juan Owens in Feb. 2013, “The Train” got back on track with a first round KO of Keith Richardson at XFC 26 live on AXStv. However, the Scientific Street Fighting specialist soon found himself without a cage to fight in after XFC closed shop on their American market.

The 27-year-old Clarksville native has been picking up fights on the regional circuit since then scoring wins over East Tennessee’s Adam Townsend, who has since been signed by RFA, as well as Pennsylvania’s Justin Steave. Landwehr is coming off a submission loss to a legit Mark Cherico at Gladiators of the Cage back in October.

Both Landwehr and Saraiva have something to prove in this fight. Saraiva must prove he is not just a guy who at one time got signed to the UFC, but still has some real fight left in him and is still evolving. Landwehr is the up-and-comer who will be getting tested against a real veteran 15-years deep into his career and has been in there against some of the best. Landwehr got submitted in his last fight and now he’s fighting a submission specialist. You’ll want to be there on March 12 to see how this one turns out.