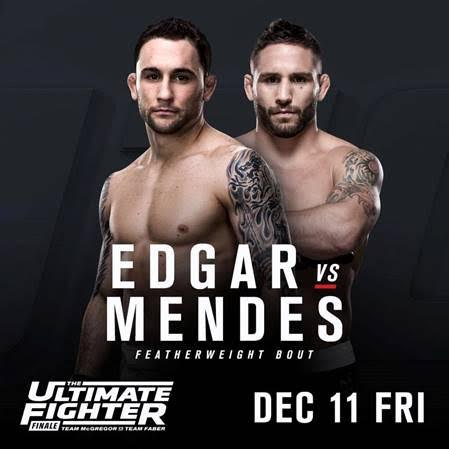 Top-ranked featherweights Frankie Edgar and Chad Mendes meet in the TUF 22 Finale headliner tonight (Friday, Dec. 11, 2015) from The Chelsea at The Cosmopolitan in Las Vegas. We’ll have live results of the entire event, as well as round-by-round updates and video highlights.

The first fist flies at 8 p.m. ET (5 p.m. PT) on Fox Sports 1, then the main card begins at 10 p.m. (7 p.m. PT) also on Fox Sports 1. Both cards are worth watching, with guys like Gabriel Gonzaga, Mike Pierce and Joby Sanchez on the prelims.

We’ll have live updates and video highlights so stick with us.

Round 1 – Gruetzemacher hurt Lloveras with punches in the last minute or so of the round. Lloveras gets a takedown and ends the round on top. 10-9 Gruetzemacher.

Round 2 – Gruetzemacher forward pressure and pace is wearing on Lloveras. His face is cut up around his right eye now. Lloveras is landing some nice body shots but don’t seem to be doing much. Gruetzemacher gets tagged with a punch/kick combo, but comes back harder with some mean leg kicks. Lloveras does have some nice punch combos but they’re not slowing down Gruetzemacher yet. But a right hand from Lloveras stuns him with a punch before the bell. 10-9 Gruetzemacher.

Round 1 – Couple of low kicks from LaFlare. Front kick to the body. Low kick from Pierce. He slips on a high kick. Back up. Pierce takes a knee to the body as he comes in for a single leg takedown attempt. LaFlare breaks out. Pierce goes for another. Presses LaFlare to the cage briefly before he breaks out. Overhand from Pierce. Low kick from LaFlare. LaFlare pawing at his left eye for some reason. Bothering him. LaFlare catches a high kick and sweeps Pierce. Pretty close.

Round 2 – Nice body kick from LaFlare. Front kick from LaFlare to the gut. Nice couple straight rights from Pierce. Couple of big knees to the body from LaFlare. He’s being very active this round on the feet. Pierce landing some decent shots too but not nearly as often. Pierce walks into a straight left. But then he stuns LaFlare. Pierce goes for the single but can’t get it. Left hook by Pierce. Laflare ducks a wide hook. Low kick and a left from LaFlare. Clinched up before the bell. 10-9 LaFlare.

Round 2 – Counter overhand right from Gonzaga. Low kick. Gonzaga playing the counter game. Ref wants action. Boos from the crowd. Right to the body from Erokhin. He’s being very tentative. Body kick from Gonzaga. He ducks under a high kick for a takedown attempt on Erokhin. He defends it, Gonzaga lands a couple knees in the clinch before the bell. 10-9 Gonzaga for an fairly uneventful round.

Round 3 – Erokhin stuffs a takedown, but he stays on it and gets the second attempt. Gonzaga on top in half guard, trying to isolate the left arm. Gonzaga postures up with a couple punches and elbows. Gonzaga trying to set up a kimura. Lets it go as he moves to mount and opens up with punches. Erokhin scrambles to his feet, clips Gonzaga with a left on the way up. Erokhin with a body kick before the bell as Gonzaga dances around avoiding any engagement. 10-9 Gonzaga.

Round 1 – Erosa jumps on a guillotine choke attempt. Wrzosek defends, then Erosa switches to a D’arce. Wrzosek stays calm and listens to his corner and is able to escape to his feet. Dirty boxing from Wrzosek. Knees from Erosa in the clinch. Fairly close.

Round 2 – Takedown from Wrzosek. Upkick from Erosa and he gets back to his feet. … Wrzosek with another takedown but Erosa is back up pretty quick. Left hook from Erosa but he gets taken down once again. Nice elbow off his back from Erosa. 10-9 Wrzosek.

Round 3 – Trading punches to start. Erosa being more aggressive until Wrzosek takes a low blow and time is called. … Back at it. Wrzosek ducks right into a flying knee but seems to just eat it. Erosa stuffs a takedown then gets one of his own. Wrzosek briefly looks for a guillotine, but then he’s back to his feet. Erosa with an uppercut. Clinch. Takedown from Erosa and he’s into half guard. Erosa looking for a D’arce. Wrzosek rolls out and is back to his feet and they end the round slugging it out. Erosa 10-9.

Round 1 – Kawajiri with an early takedown. Knight with rubber guard. Knight lands some nice elbows to the side of Kawajiri’s head as he locks on a triangle. More elbows to the top of the head. Kawajiri is able to roll out eventually. And he’s back in full guard landing elbows. Kawajiri content to punish from full guard; punches, hammerfists. Knight bleeding. Kawajiri 10-9.

Round 2 – Dunham goes back to outstriking the Massachusetts submission artist. Low kick from Lauzon. Knee from Lauzon but Dunham is beating him up against the cage. Lauzon has cut Dunham open at some point. Dirty boxing from Evan. Elbow from Lauzon on the break. Punch combo and a pari of knees from Dunham. Front kick. They trade a few more inside before the bell. 10-9 Dunham.

Round 3 – Couple punches from Dunham. High kick. Left and a right, low kick. Front kick and a right from Evan. High kick from Dunham lands upside the noggin. Joe tries to drop down into a scissors sweep but it fails and he just gets back up as Dunham watches. Body kick from Dunham. Low kick from Joe goes a little high. More striking combinations from Dunham as we enter the final minute. Lauzon looks for the Mighty KO with a big uppercut that just misses the mark. Joe’s face busted up. 10-9 Dunham.

Round 1 – Ferguson comes out aggressive. Edson starts scoring with strikes and Ferguson rolls for a leglock and they end tied up on the ground exchanging punches. Ferguson hits him with an illegal kick during the ground exchange and timeout is called while the doctor checks him out. He’s okay but Big John takes one point from Ferguson. Super aggressiveness from Ferguson. Barboza landing some clean counters. This is a REAL fight guys. The antithesis of that Gonzaga fight. Great counters from Edson. He catches a kick and sweeps Tony’s back leg. Back up. Left hook from Barboza, knee to the body. He’s gaining confidence and lands a clean left hook. Ferguson scores. Barboza with his patented wheel kick. Left hook. Tony rolls for a leg again. Misses. Tony’s reminding me of Rousey now. Being too aggressive almost. Huge body kick from Barboza after catching a kick of Ferguson’s. 10-8 Barboza.

Round 2 – Ferguson lands a beautiful upward elbow but then walks into a right elbow from Barboza. Barboza’s face is a bloody mess, streaming into his right eye. Barboza puts him on his back but is taking punishment from Tony off his back. Ref stands them up and they immediately start slugging. Big right from Barboza. Perfect spinning elbow from Tony, then a high kick. Edson shoots, stuffed. Scramble, Ferguson hops on a D’arce and Barboza taps out. That was such an amazing fight. Do yourself a favor and watch this for a piece of MMA history.

Round 1 – Ryan looks dry like he just woke up from a nap. Artem looks like a Russian killing machine. Ryan starts with some kicks then rolls for a leglock. This sets up a scramble and Ryan is able to hop on Artem’s back, locking in the RNC, with a body triangle. Artem is able to survive for now but Hall is still on his back and continues to soften him up with body shots and hammershots to the head. 10-9 Hall.

Round 2 – Hall rolls for a leg early on but misses. Artem comes in swinging but ends up inside Hall’s guard on the ground. Hall goes for the leg again, but Lobov escapes to his feet. Hall gives it one more try to no avail. Back up. Hall shoots, stuffed and he pulls guard. Hall goes for a leg again.

Round 3 – Artem stuffs a takedown then Hall rolls for a leg. Artem escapes to his feet but Hall jumps guard. Lobov inside full guard. Ryan goes for the legs again but Lobov escapes to his feet. Hall hops up and jumps on Lobov’s back. Hall lands some punches as the ref wants action. 90 seconds to go as they’re propped against the cage, Hall still on his back with a body triangle, and landing punches. Hall did it and ends the round still on Artem’s back. This is a fun grappler to watch.

Edgar wants a shot at the title next he says in his post-fight interview.