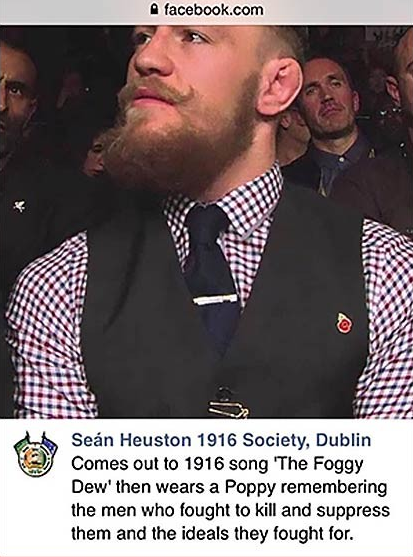 UFC interim featherweight champion Conor McGregor is in hot water after responding to detractors of a certain pin he was photographed wearing in public known as a “poppy”. This emblem is traditionally worn in British Commonwealth nations around Remembrance Day (Nov. 11) to honor fallen soldiers.

The poppy emblem is considered controversial in Ireland with some believing it represents the oppression by the British Army after World War One, the Black and Tans and the occupation of Northern Ireland.

The image seen below of Conor McGregor wearing the poppy has been going around online with critics labeling him a “sellout” and disrespectful or that maybe he didn’t really understand what the emblem meant.

Then Conor responded with this controversial statement:

“I know where my allegiance lies and what I do for my country. I don’t need a stupid little flower with a 100 different meanings to tell me if I do or do not represent my country.”

“Check the facts of its original meaning. ALL soldiers. ALL wars. I have the blood of many nations on my gloves. Fought and beat on the world stage. You have a pint in your hand and a Celtic jersey on in your local. F*ck you and the Queen.” 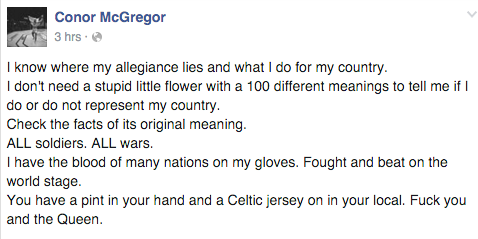 Now aside from the poppy, he just said “f*ck the Queen!” I’m pretty sure you could’ve be stoned to death for that a few years ago. This statement did not sit well with Conor’s British fans. … Just a few of the most upvoted comments to that statement we glanced over read:

“Lost so much respect for you, was a big fan!!! Hope Aldo takes your head off..#TeamAldo” -Liam Lennox

“Conor McGregor, the poppy does not represent all soldiers everywhere. It represents British soldiers and all British wars that they fought in, including the wars against Ireland.

“Anyone can be duped and pressured into these things if they don’t know the full story so it’s not a reflection on you, but now you do know better perhaps it would be a wise move in future to not wear an emblem that represents the forceful oppression of your own people.

“Don’t let the politically correct brigade push you into selling out, you’re too good for that.” -Tom Rooney

“Do you really feel the need to justify the doubters by saying ‘Fuck the Queen’ only lose respect from the fans for that. Don’t alienate the people that cheer for you, it’s not classy.” -Christopher Fenton