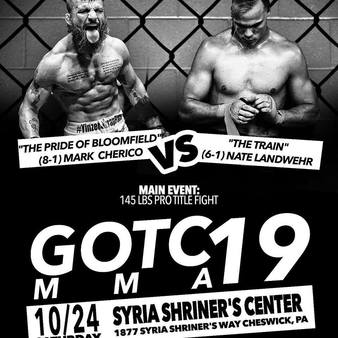 GOTC 19 goes down Saturday night, Oct. 24, at Syria Shriner’s Center in Cheswick, Penn. The card includes 9 bouts total, five amateur and four pro, and is headlined with a featherweight title bout with Clarksville, Tennessee’s Nate “The Train” Landwehr (6-1) going into enemy territory to face Pennsylvania’s Mark Cherico (8-1) — who plans to retire after the fight.

PMN will provide live results of the fights and the live stream is below. The actions kicks off at 7 p.m. ET/6 p.m. CT.