GSP comeback: Would he be a factor in the welterweight division? 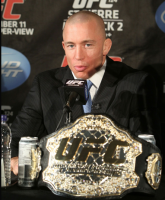 There are multiple reports that former UFC welterweight champion Georges St. Pierre (25-2) is “itching” to come back to the sport that he dominated with nine title defenses. St. Pierre decided to vacate his welterweight title and walk away from the sport after a split decision win over Johny Hendricks in November 2013.

If he does decide to fight again it will be well over two years since he last competed, he’ll be close to 35 years old, and will be fighting after a second ACL injury in which he was medically cleared to train on October 17, 2014.

So what does the all-time great offer the welterweight division? Should he even come back and fight?

It was clear in his last few bouts that St. Pierre’s ACL injury zapped a bit of his explosion in his wrestling game that he heavily relies on to be successful against his opponents. However, he was still able to notch wins over two of the fighters currently ranked in the top five after suffering the injury.

There are three fighters ranked in the top five that St. Pierre hasn’t fought. They are current champion Robbie Lawler, Rory MacDonald, and Tyron Woodley.

We can omit MacDonald as an opponent since he trains with St. Pierre. That leaves us with Lawler and Woodley.

Could GSP weather the firepower that Lawler has in his hands and feet for five rounds? GSP could have taken Lawler down at will pre-injury, but that’s probably not the case anymore. We saw GSP get battered against Johny Hendricks on the feet, and Lawler probably has more firepower than Hendricks. Is this a fight you would want to see?

Tyron Woodley was a All-American collegiate wrestler at The University of Missouri. He has exhibited excellent takedown defense in his fights, but is usually very tentative with his striking. He also doesn’t fight well at all when being pressured and/or moving backwards. He does have good power in his strikes when he lands though. This fight would likely play out the way the Woodley/MacDonald fight went, with GSP winning a decision. Is this a fight you would be interested in seeing?

I think GSP should get an immediate title shot if he chooses to return since he never technically lost the title. If not, Woodley is next in line and the most logical option left. A GSP return would be a boost to the division, if only for one or two fights. He’s arguably the greatest mixed martial artist of all time, and I’d be sure to tune in to see how much he has left in the tank.