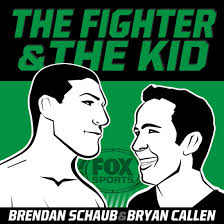 Pat Cummins’ UFC debut was against Daniel Cormier on eight days notice. That was his debut. Now Cormier is the champ and Pat is back in the real world where he’s trying to work his way up the light heavyweight ladder. Pat was a guest on Thursday’s edition of The Fighter and The Kid podcast. He and Brendan (host) are friends and we find out there’s much more to the Patrick Cummins story than a lucky break to fight on MMA’s biggest stage..