I got you babe: Nick Diaz finds support from pop icon Cher 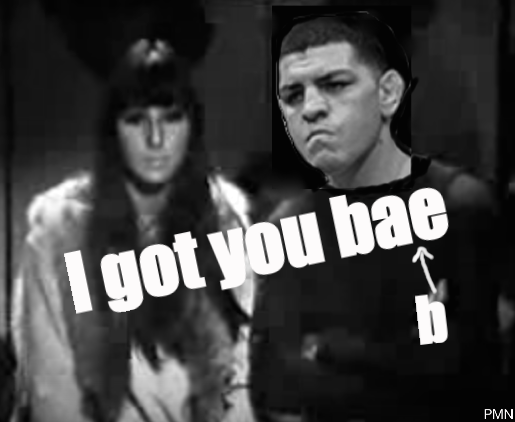 When Nick Diaz got a 5-year suspension for a third marijuana offense in Nevada, the MMA world was outraged, especially since his opponent for that UFC 183 fight in January of this year was Anderson “The Spider” Silva, who tested positive for actual performance enhancers, drostanolone and androsterone, but only received a 1-year sentence. Ronda Rousey has spoken out about it, Floyd Mayweather, Joe Rogan and many others.

But a supporter some might consider a little unusual popped up online at 1:03 a.m. this morning and it was none other than pop icon Cher. Here’s some interesting facts about Cher. She’s motherf*ckin 69-years-old. Get the f*ck outta here. I remember this lady strutting around a battleship full of sailors wearing nothing but a see-through leotard and singing like it was yesterday. Here’s another fact. Cher’s real name is Cherilyn Sarkisian. Betcha didn’t know that and bet you didn’t think that would be something you’d learn today when you woke up. Well you can thank Nick Diaz for that.

Cher tweeted out to her 2.85 million followers a link to the “Lift the NSAC ban from MMA fighter Nick Diaz” petition on whitehouse.gov which currently has 67,067 signatures at the time of writing this article. If it gets 100,000 signatures by Oct. 16, 2015 President Obama is supposed to take it under consideration. If just a fraction of Cher’s followers show support by signing the petition online, it’s quite possible (maybe not probable) the President of the United States could actually #freenickdiaz.

Thanks Cher, here’s one for old time’s sake.

If this thing goes through and Diaz comes back, it seems only appropriate Cher should sing during his walkout. Which Cher hit would you like to see her sing for Nick Diaz’s walkout?