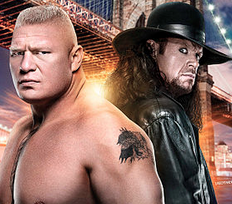 Tonight Brock Lesnar will try and enact revenge against The Undertaker for costing him the Heavyweight Championship against Seth Rollins at Battleground. Can The Conqueror once again take down The Deadman like he did at WrestleMania or will The Beast Incarnate get slain?

SummerSlam 2015 kicks off tonight at 7 p.m. ET (4 p.m. PT) from Barclays Center in Brooklyn. PMN will have live results and updates of all the matches, so join us right here and feel free to share your thoughts on how it all unfolds.

We’ve also got U.S. Champion John Cena putting his title on the line against Seth Rollins’ Heavyweight Championship. We have an Intercontinental Championship Triple Threat match, a Fatal 4-Way Tag Team Championship match and much more.