Watch Brock Lesnar get tombstoned by The Undertaker on Raw (VIDEO) 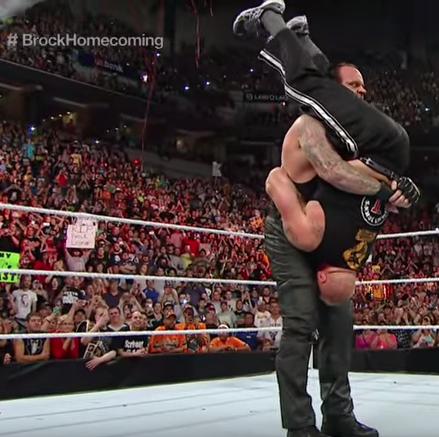 Paul Heyman took center stage last night at Monday Night Raw to introduce his client Brock Lesnar for a Minnesota homecoming. The Advocate sang a hymn to The Beast Incarnate, “My eyes have seen the glory of The Conqueror, My Lord… Glory, glory, Brock Lesnar… The Conqueror marches on…” But the benediction was interrupted as the bell began to toll which meant The Deadman had arrived… or had he? The lights flickered but there was no Undertaker. Heyman knows it’s mind games and invokes heaven and hell in swearing Brock Lesnar will take The Undertaker to Suplex City at SummerSlam on Sunday. The lights flicker again and Taker appears in the ring and kicks Lesnar in the groin. He then picks him up for a choke slam and finishes the job with a tombstone piledriver. Check out the carnage below.

Do you think Lesnar has what it takes to stop Undertaker again in their rematch at SummerSlam, or will The Undertaker take out The Beast? If this tombstone is any indication, Lesnar is going to have his hands full.