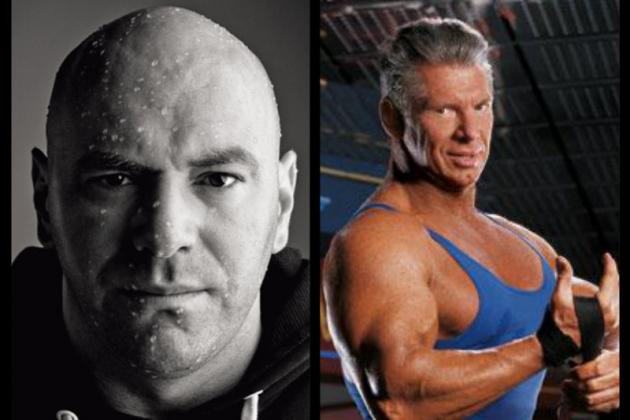 Remember when Dana White recently said this about Ronda Rousey?

I’d like to put her on that card. That card is probably going to be in Dallas, Texas stadium. December (5), I hope so. We’re working on it.

Well, guess what. That’s the venue that WWE has been bragging about booking for some time. AT & T stadium has just been declared the unofficial battleground for who does bigger numbers.

If the stadium does host a UFC card stacked to the bone with Conor McGregor vs. Jose Aldo and Rousey vs. Tate (possibly) headlining it could mean the stadium might be full for that event. The venue can hold up to 100,000 fans and for the UFC that would be monumental. Dana made it clear to the press this past weekend he doesn’t know how many seats he would make available since the seating can be scaled.

WWE on the other hand may have the better shot at filling it since it’s their flagship event that’s coming. Wrestlemania 32 takes place next year on April 3, 2016. White says the UFC could be there in December and only time will tell if that affects the numbers for WM 32 attendance. Probably not, but it is worth noting.

Now, one thing we can all make a sure bet on is the announced numbers for the events. Dana will report accurate numbers for the event because MMA media outlets love fact checking everything Dana White says. Vince McMahon is notorious for exaggerating the attendance numbers of his events so we can guess his numbers to be somewhere between 1,000,000 and 1,000,000,000 for WM 32.