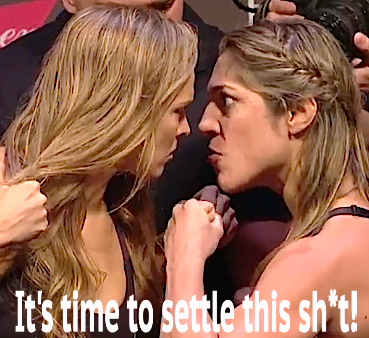 UFC women’s bantamweight champ Ronda Rousey puts her 11-0 unbeaten streak and title on the line against Brazilian slugger Bethe Correia in the UFC 190 main event tonight in Rio de Janeiro. Someone’s “0” has got to go, and has Correia’s trash talk possibly gotten into Rousey’s head enough to affect her performance or has she simply bit off more than she can chew by taunting the champion?

In the co-headliner, Brazilian MMA legends Maurico “Shogun” Rua and Antonio Rogerio Nogueira clash once again in a rematch from a 2005 “Fight of the Year” bout in Pride in which Shogun took home the unanimous decision victory.

Stick with us here as PMN provides live results and round-by-round updates of the entire UFC 190 card starting with the first preliminary card bout at 7 p.m. ET (4 p.m. PT).

Round 1 – Viana countered a wheel kick with a takedown. Cannetti goes for a leglock but is unable to secure it.

Round 2 – Cannetti with a head kick and takedown. Viana scored a nice sweep that sent Canneitti to the ground. Viana with a late takedown.

Round 3 – Cannetti controls in the clinch and scores a couple takedowns in the final minute.

Round 1 – Hester with an early takedown, controls Miranda against the cage where he lands knees and the occasional punch. Miranda eventually is able to move to top control where he unloads a flurry of punches, but Hester survives at least for now, though he is cut open and bleeding over his right eye. Two more big left hands from Miranda who is still controlling on top from half guard. Another left. He drops one final short elbow before the bell. 10-9 Miranda.

Round 2 – Another early takedown from Hester but he can’t hold him down. Leg kick from Miranda drops Hester. Hester with a couple punches, then shoots for the double and briefly gets Miranda down, but it’s right back up. Hester goes for a takedown, takes a knee to the face and gets put on his back by Miranda who unloads several rapid fire punches from the top. He holds one of Hester’s arms across his own face and pounds on him until the ref stops it.

Round 1 – Body kick and punches from Iuri. Issa with a leg kick. Issa backing up, looking tentative. Big knee to the body from Iuri. Issa goes for a takedown but gets caught between Iuri’s legs as he looks for an armbar. Issa scrambles free and takes top control. Issa moves to side control, then looks for a kimura briefly. Iuri takes his back, briefly looks for an armbar, but ends back underneath Issa who takes full mount now. Issa lands a few punches before the bell. 10-9 Issa.

Round 2 – Iuri drops Issa with a left counter punch. Issa is right back up though standing in front of Alcantara. Leg kick inside from Issa. Issa shoots, but Iuri takes top control. Issa stays on him, looking for the single, now pressing Alcantara to the cage. Ref separates them. Hard straight left from Iuri hurts Issa, he lands another one and Issa goes down. Iuri takes top control, but Issa gets back up. Another straight left from Iuri. Again. Issa scores with a left of his own, then Iuri lands another. 10-9 Alcantara.

Round 3 – Body kick from Iuri. Issa shoots, drags Iuri down, but he gets right up. Hard body kick from Iuri, he then stuffs a takedown attempt from Issa. Iuri ends up on top in side control looking for a kimura. Iuri postures up with big punches that hurt and bloody Issa. Iuri lets him up. Straight left, leg kick and a left. Flying knee scores, jumping round kick, punches. Issa retreats, he shoots with 10 seconds to go. Stuffed. 10-8 Alcantara.

Round 1 – They trade leg kicks. Alves catches a kick and puts Taleb on his back, then works from the top before Taleb makes his way back to his feet. Right from Alves. Jab from Taleb. Alves drops him with an overhand right, but Taleb is right back up. Takedown attempt from Taleb but Alves shakes it off. Taleb catches a kick then pushes Alves to the cage. Knee to body from Taleb. He has underhooks. Another knee and elbow on the break. Alves 10-9 due to the knockdown.

Round 2 – They trade high kicks that are both blocked. Alves with some serious takedown defense after Taleb catches his kick and tries to dump him. Alves catches a kick and dumps Taleb now, then takes top control in half guard. Alves warned for grinding his chin in Taleb’s face. Big left from Alves. They scramble and Alves briefly looks for a guillotine choke. Taleb pushing Alves against the cage. Knee from Alves. Taleb drops down for a double but Alves jumps on a guillotine choke and Taleb taps out. Very nice. 10-0 and 24-years-old. Keep an eye on Warlley Alves.

Round 2 – Cummins presses Feijao to the cage, but they separate and Feijao lands some clean punches and Cummins is bleeding heavily but scores with the takedown. Boos from the crowd at the inactivity. Cummins inside full guard, he postures up with punches. Feijao with a clean upkick. Cummins lays into him with elbows and punches. Ref has the doctor look at Cummins’ face. He’s okay. They restart and Cummins eats another upkick. Back to the feet and they exchange punches, Feijao loses his mouthpiece. Puts it in. Cummins dumps him on his butt. Feijao turtles up and ends the round with Cummins landing punches. 10-9 Cummins.

Round 3 – Takedown from Cummins. From inside full guard he blasts Feijao with elbows until he’s literally incapacitated. He can’t even get up and it takes several people to help him up to the stool. The replay shows Feijao’s mouthpiece getting knocked out from those elbows and he still took several shots after that. Ouch.

Round 1 – Maia gets a takedown right away, straight to mount, goes for a mounted triangle and Magny escapes. Maia back to mount, half guard. Maia back to full mount where he rains down punches. Magny bucks and squirms and tries holding on to Maia to defend. Maia trying to set up an armbar, Magny defends. Maia goes for the arm again but the bell sounds. 10-9 Maia.

Round 2 – Magny pressing, but gets taken right back down. Maia in side mount. Magny briefly locks up Maia in a triangle but lets it go and Maia moves to full mount. They scramble and Maia ends up back in full mount dropping punches. Magny gives up his back and Maia gladly takes it, locking up a body triangle. Magny tries to peel Maia’s legs free but this allows the Brazilian to lock on the choke and Magny taps out.

Round 2 – Gadelha comes out landing punch combinations then a big right that stuns Aguilar and has her retreating. Gadelha puts her to the cage then scores a takedown. A bloodied Aguilar gets back to her feet, clinched with Gadelha against the cage. They exchange knees in the clinch. Jag moves back to the center. More punches from Gadelha. Leg kick from Jag. More punches and a takedown from Gadelha. 10-9 Gadelha.

Round 1 – Silva stalking, throws a knee, Palelei shoots in and presses Bigfoot to the cage looking for the single. Soa breaks out. Double jab from Soa. Uppercut from Silva. He presses Soa to the cage, knee to thigh, more knees. Soa gets a trip takedown and takes top control in half guard. Soa lands some hammerfists, postures up with punches and lands several before the bell. … Not sure if it’s just me, but Bigfoot appears to look a lot different post-TRT ban.

Round 2 – Bigfoot hurts Soa with an uppercut. Soa covers up against the cage and Silva finishes him off with big punches.

Round 1 – Big Nog scores with punches and pushes Struve to the cage where he controls him for several moments. Struve gets some distance and wobbles Nog with a right hand. Nog immediately clinches up with a veteran’s instinct. Struve with another right hand, Nog eats it, then pushes Struve to the cage where he scores a very brief takedown. Back up Struve with a knee to the body. Front kick from Struve, big leg kick. Nog touches Struve up with a punch combo and wraps him up around the body. In the clinch, punches from Nog, knees from Struve. Struve with some nice kicks. A leg kick. Nog with a couple punches. Big leg kick from Struve, right hand. Fun fight. 10-9 Struve. … Nog has more guts and grit, experience and fighting instinct in his pinky toe than most men have in their whole being.

Round 2 – Nog backs him to the cage with punches, then a body lock. They wrestle in the clinch, Nog drags him down and takes his back with one hook in, moves to mount. Struve attacks the leg and it’s back to the feet. Nice escape from Struve. Struve using his reach now popping Nog as he tries to get inside. He eats them and goes for the single but can’t get it. Front kick from Struve, big right hand, body kick. He’s looking good with his striking. Faster than I remember. Nog pushes him to the cage. Struve with an uppercut. Front kick, again. Leg kick. He’s like the white Kareem Abdul Jabar. Front kick. Leg kick inside from Nog. Jab from Struve, hard leg kick, knee. Jab from Nog. big right from Struve. Nog presses him to the cage. Knee to the body from Struve. 10-9 Struve.

Round 2 – Lopes with a takedown near the end of the round. Lopes’ eyes are busted up and bleeding.

Round 3 – Takedown from Lopes. He jumps on a guillotine a few moments later but Vieira ends up getting free and landing hammerfists from the top as the final minute counts down. Lopes firing off punches off his back.

Round 1 – (Bruno in blue shorts) (Franca in red shorts) and they don’t appear to be Reebok either. Bruno swinging wild, eventually gets a brief takedown. Franca ends up getting a takedown of his own with about 2 minutes to go. Bruno gets up but gets dragged back down, but is right back up again. Franca with another takedown and takes his back with one hook in. 10-9 Franca.

Round 2 – Leg kicks from Franca, he then clinches and pushes Bruno to the cage. Bruno turns him around and controls for a brief time before Franca regains control and drags Bruno to the ground, but Bruno takes top control inside guard. … Franca takes Bruno’s back with about a minute to go, with a body triangle. He’s unable to secure the choke. 10-9 Franca.

Round 3 – Bruno comes out swinging, and he then takes Franca down. Franca gains the advantage then gets to his feet. Bruno with a takedown but Franca is right up. Franca with a low blow and timeout is called. … Back at it. Takedown from Franca and he takes Bruno’s back looking for the choke. He gets under the chin this time and Bruno taps out with about 14 seconds left in the match.

Round 1 – Little Nog gets the better of the stand-up and landed some vicious combinations as he backed Shogun into the corner. Shogun was definitely hurt and wobbly. 10-9 Nogueira.

Rounds 2 & 3 – Shogun recovers from being rocked in that first round and out-strikes Little Nog the rest of the fight. Neither is able to finish though.

Round 1 – Ronda walks to the cage quickly, emotionless. Stone face. Someone threw a Brazilian flag at her. … So it went like this. It was a dog fight for about 10 seconds and then Ronda pushed Bethe over backward, as she rolled back to her feet Ronda lit her up with a flurry of punches that sent Bethe face first unconscious to the canvas! Boom, she does it again, this time in just 34-seconds.