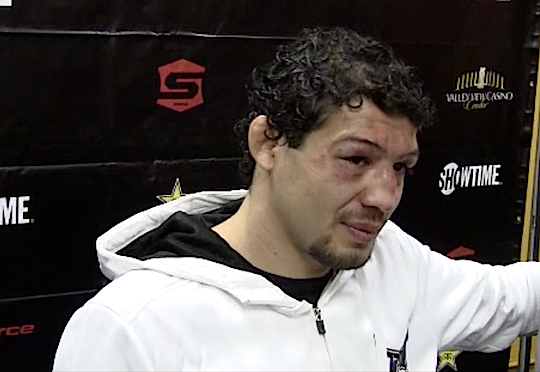 Having fought at UFC 188, Gilbert Melendez was scheduled to make a quick return and fight on the upcoming UFC Fight Night 71 card on July 15. Plans changed when it was revealed that Melendez tested positive for a banned substance following his UFC 188 performance and that he had been suspended for one year.

On a statement released on UFC.com, Melendez gave the following comments:

“Regrettably, I tested positive in my post fight urine sample for UFC 188,” Melendez said. “I did not inject anything, but I am responsible and accept the consequences for the results. I will make sure I am better educated about the products I use and their implications. Going forward I will ensure no products I use will contain banned substances. I am sincerely apologetic to everyone who supports me, including my fans, sponsors and the UFC. I value your trust and respect and will do everything in my power to keep it.

The UFC’s statement noted that “…Melendez tested positive for exogenous origin of testosterone metabolites.” As you can likely guess, this means that his drug test revealed testosterone that was not naturally produced, which was likely discovered in the form of a higher level that was naturally occurs in the body. I am speculating on that part, but it seems to be the most likely explanation of the use of the word “exogenous” in this situation.

So, Melendez is suspended for a year and now has a positive test on his record. People make mistakes, I don’t have problem with that. Some people may be lauding Melendez for not disputing the positive test, and there is something to be said for his statement that he is responsible and accepts the consequences for the results, but let’s have a look at his other comments.

“I did not inject anything…” The first question I’d have to ask here is “so what?” Anyone whose knowledge of performance enhancers goes beyond Rocky IV where Dolph Lundgren is injected with a unknown substance during the training montage knows that various steroids, testosterone, and performance enhancers comes in a multitude of other forms such as pills, skin patches, gels, and even patches that stick to your gums, to name a few. So here, while Melendez says he accepts responsibility, he’s also trying to distance himself from the stereotypical steroid user.

“I will make sure I am better educated about the products I use and their implications” This is the steroid equivalent of “I’m sorry officer, she looked 18”. Ignorance is not a defense, and in this situation, a statement like that from Melendez is even more indefensible. He is at the highest level of the sport, and there has been no shortage of reporting on the UFC’s commitment to a stricter drug policy. Melendez knew exactly what performance enhancers were banned and that list should have been in the forefront of his mind every single time he reached for an over the counter supplement, which is what his statement implied caused the positive test.

In making this statement in the way he did, Melendez accepted responsibility without accepting responsibility. He didn’t dispute the positive test, but placed the blame on the products he was taking, and by association, on anyone who helps him with his nutrition by implying that they either did not know, or failed to tell him, about any performance enhancers he was taking.

Did Melendez know that he was taking performance enhancers? Maybe he did, maybe he didn’t. Maybe he didn’t ask what was in all of the supplements he was taking because he wanted to retain some sort of plausible deniability in case a situation like this happened, or maybe he did truly fall victim to someone in his camp who thought they were helping him out by giving him performance enhancers and not telling him. Either way, Melendez is now forced into a year of not fighting – a year of no fight paychecks, no sponsor money, and no potential performance bonuses.

Ultimately the responsibility lies with the fighter, because at the end of the day, the fighter steps into the cage alone, and the fighter is the one who will suffer the most from the consequences of a positive test. With the new drug test policy that the UFC has put in place and the longer suspension times acting as a significant deterrent, let’s hope this helps solve the problem sooner rather than later and that more fighters don’t find themselves where Melendez finds himself now.