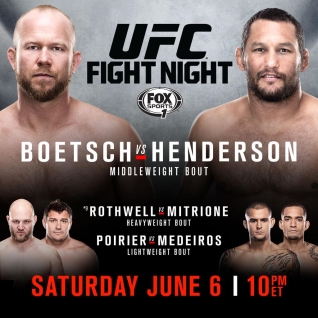 UFC Fight Night 68: Boetsch vs. Henderson takes place this evening, June 6, from Smoothie King Center in New Orleans, La. Headlining the card will be a middleweight showdown between the always dangerous Tim Boetsch and hard-hitting legend Dan Henderson. Powerful heavyweights Ben Rothwell and Matt Mitrione will square off in the co-headliner.

PMN will be right here to deliver you the live results and round-by-round updates throughout the evening. Let us hear your thoughts on the fights.

Round 1 – Quinonez earns a hard-fought takedown, takes Morales’ back and chokes him out.

Round 1 – Back and forth on the feet. Nothing too significant.

Round 2 – Collier getting the better of the standup, using his reach and height to his advantage. Takedown from Abreu in the final minute. 10-9 Collier.

Round 3 – Takedown from Abreu but Collier gets up pretty quick. Abreu gets another takedown. They slug it out in the final moments for an entertaining scrap. Both guys landing hard shots. Abreu 10-9.

Collier talks after the fight about how big a deal this win is because he and his wife live off quarters at the end of the week.

Round 1 – Takedown by Edwards but Proctor is up quickly. Proctor got off with some good punches and leg kicks and Edwards landed a nice spinning back kick as well as some decent punches and a leg kick or two. Pretty close round.

Round 2 – Edwards with a barrage of knees in the clinch against the cage. Proctor breaks free after landing an uppercut. Proctor with a head kick, then a hard body kick a few moments later. Two big right hands from Edwards counters a leg kick and he takes Proctor down. Proctor up quickly but eats a knee on the way. Proctor with a very sweet punch/kick combo as he continues to use his footwork. Proctor eats a jumping front kick to the face. 10-9 Edwards but it was close.

Round 3 – Proctor doing a good job sticking and moving. Edwards goes for a takedown and Proctor jumps on a guillotine but Edwards escapes and they are back to the feet. Edwards gets hurt with a knee to the body and Proctor goes for another guillotine (Jon Jones style) and puts Edwards to sleep two seconds before the bell. AMAZING!

Round 1 – Wade with a takedown but Giagos right back up. Giagos drops Wade to a knee with an overhand right but Wade ends up scoring a takedown with 2 minutes to go. Giagos gets back up after a few seconds. Big elbow from Wade then a leg kick that buckles Giagos. That elbow cut Giagos over the right eye and he’s bleeding.

Round 2 – Wade with a takedown and top control about midway through the round. Giagos is able to reverse Wade and gain side mount. Wade reverses him with just over a minute to go and finishes on top. Neither guy was able to do much damage really.

Round 3 – Giagos with a couple nice leap-in left hooks but gets taken down. Giagos gets back to his feet and lands another leap-in front left hook. Giagos fights his heart out til the end but ring control and the takedowns from Wade will make it close.

Akhmedov said after the fight he’d prefer to have gone the distance. That was his plan. Alrighty then.

Round 1 – Lewis throwing spinning sh*t. Jordan with a takedown working the ground and pound but Lewis gets up and they throw down winging punches at each other for about 15 seconds. Jordan with another takedown where he lands in side mount dropping elbows. Solid action. 10-9 Jordan.

Round 2 – A beautiful hook kick from Jordan lands perfect on the jaw and drops Lewis. Jordan takes full mount dropping B’s. Lewis gives up his back where he continue to gets battered until the ref stops it. Jordan wins in front of his home crowd.

Round 1 – Right from Rivera. Rivera lands a left hook that snaps the head and drops Caceres. Rivera pounces and it’s over just like that.

Round 1 – Birchak drops Soto with a right during an exchange. Soto recovers and gets to his feet but Birchak keeps on the pressure and drops Soto face first unconscious with a flurry that ended with an uppercut and hook.

Round 1 – Tavares with a takedown early. Ortega goes for an armbar off his back. Lets it go as Tavares postures up with punches. Ortega goes for another armbar and uses it to sweep Tavares into full mount. Tavares opened up with elbows and is bleeding pretty good. He escapes from underneath though and stacks Ortega before it goes back to the feet. Big judo toss from Tavares before the bell.

Round 2 – A spinning backfist from Ortega stumbles Tavares (landing behind the head), who then retaliates with a takedown. Ortega lands a nice up kick from bottom but Tavares continues to control from top and work the ground and poundage. Ortega back up long enough to get taken right back down. After a failed triangle attempt Tavares takes his back and unloads punches that cause Ortega to turn into full mount by Tavares. Ortega gets up and taken down again as Tavares goes back to work until the bell. Lots of blood.

Round 3 – Tavares actually has two cuts on his head from Ortega’s elbows off his back. They almost stopped the fight between rounds. Nice right hand bouncing off the fence by Ortega. They slug it out on the feet until Tavares grabs a Thai plum and lands a knee right in the groin and Ortega drops to his knees immediately and time is called. … Back at it with 3 minutes to go. High kick from Tavares. Ortega with a nice right. Throwing spinning sh*t. A left hand from Ortega knocks the mouthpiece out of Tavares’ mouth and the ref stops it and lets him put it back in. Ortega stuns Tavares with a solid right on the chin and he goes down. Ortega follows up with punches and he’s D-O-N-E.

Round 1 – Poirier drops Medeiros with a right. He somehow gets up and gets dropped again even worse but somehow survives. He looked done man but ends up getting to his feet. Poirier scores a takedown and takes Medeiros’ back but can’t finish. Medeiros back up and hurts Medeiros with a body kick. Poirier backs him to the cage and unloads a series of punches that can only be described as… HOLY SH*T how is Medeiros still standing? The ref feels the same way and just stops it. Too much punishment.

Round 1 – Right hook counter from Mitrione. He lands another right. Rothwell looking to counter. Leg kick and a right hand from Rothwell. Body kick from Mitrione followed by a right hook. Mitrione shoots for the takedown but gets caught in a guillotine/turned to a “go-go choke” (front choke) and Mitrione taps quickly.

Round 1 – Here we go. Been a great night of fights. Overhand right from Boetsch. Hendo lands the big right that buckles Boetsch, then Hendo lands another right then drops him with an uppercut then finishes Boetsch off with several punches and it’s over folks. 44 f*ckin years old. Amazing!!!

Please let us hear your thoughts on the fights in the comments section below.