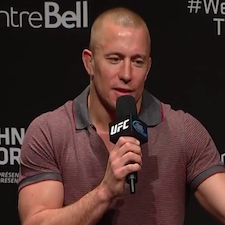 Former UFC welterweight champion Georges St-Pierre took part in a fan Q&A in Montreal on Thursday as part of UFC 186 festivities. Now retired, fans weren’t allowed to ask GSP any questions about potentially returning to the Octagon. A fan did sneak in a question about St-Pierre possibly competing in Metamoris, however. St-Pierre’s training partner and friend Rory MacDonald, who will be vying for the 170-pound title against Robbie Lawler at UFC 189 on July 11, also took part in the Q&A.