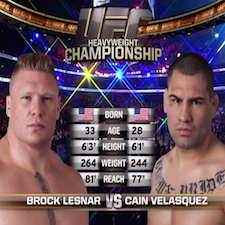 UFC has made the UFC 121 heavyweight title fight between Brock Lesnar and Cain Velasquez available for our viewing pleasure in honor of Cain’s upcoming title defense against Fabricio Werdum at UFC 188 in June.

The champion Lesnar was 5-1 in the UFC at the time and had already defended the heavyweight championship twice, defeating Frank Mir via second round TKO at UFC 100 in 2009 and stopping Shane Carwin via second round submission (arm triangle choke) at UFC 116 in 2010.

Cain was 6-0 in the UFC at the time and had finished five by knockout, including a first round KO of Antonio Rodrigo Nogueira eight months earlier. The date was Oct. 23, 2010. It was the UFC 121 main event in Anaheim, Calif. And it was the night Brock Lesnar lost the UFC heavyweight title to the man who still retains it to this day.

Lesnar went on to fight one more time inside the Octagon, losing via first round TKO to Alistair Overeem at UFC 141 in Dec. 2011. After losing the title a year earlier to Velasquez, Lesnar was diagnosed with diverticulitis and underwent surgery. He tried to return but after the devastating loss to Overeem, Lesnar had enough and packed it in. Today he is a staple in the WWE where he had made a name for himself prior to his MMA career, and where he returned once it was over.