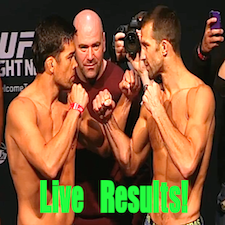 Round 2 – Sterling comes out aggressive as Mizugaki tries to counter. Sterling puts him down early. Mizugaki gets up but Sterling still has him locked up and lands a knee. Mizugaki returns same. Sterling backs out with a left. Short uppercut inside from Mizugaki as Sterling shoots. Stuffed. Front kick from Sterling. Flying knee attempt from Mizugaki. Mizugaki stuffs another shot. Sterling gets him down with the next one, but Mizugaki right back up. Sterling drags and trips him down again right away. Sterling takes his back and ends up with both hooks in after a scramble. Sterling lands several heel strikes from the back but is unable to find the choke before the bell. Domination. 10-9 Sterling

Round 3 – Sterling gets another takedown early and takes Mizugaki’s back once again. Sterling wraps up an arm triangle from the bottom and Mizugaki taps out.

Round 3 – Anderson landing some nice punches this round as Villante eases back with the leg kicks. Villante with a short left hook and jab. Villante hurts Anderson with a couple big right hands over the top and Anderson is out on his feet propped against the cage. That’s how you keep it out of the judges’ hands. Good stuff.

Round 1 – Body kick and stiff left from OSP snaps Cummins head back. Body kick again from OSP, again. Cummins catches it though and takes him down. Right back to his feet from OSP. Cummins shoots, gets him down briefly, back up Cummins pushes him to the cage. Knees to the thigh from Cummins. Big knee to the body from OSP looks to stun Cummins. Spinning back kick from OSP. Cummins slams him but he’s right back up. Straight right from Cummins. Front kick OSP. They trade left hooks. Stiff jab from OSP. OSP looks HUGE. Straight left from OSP. OSP shoots, no dice. Right hand from Cummins and OSP counters quickly with a left uppercut then lands several hammerfists until Cummins goes out. Boom! Who called it, bitches. In the post-fight interview OSP throws his name in the hat for the Nashville card in August.

Round 2 – Dariush with a takedown just before the 4 minute mark. Miller goes for a guillotine but Dariush escapes and takes full mount. Dariush drops some elbows which causes Miller to give up his back. Dariush looking for the RNC, body triangle locked on. Miller stands up and tries to shake Dariush off but is unsuccessful, but survives until the buzzer. 10-9 Dariush

Round 3 – Left straight from Dariush. He pushes Miller to the cage as he drags Miller down and takes mount. Now in half mount looking to set up an arm triangle. Two minutes to go and Miller is stuck on his back. Dariush moves to full mount, drops an elbow. Miller gives up his back, stands up and tries to spike Dariush but it doesn’t work. Dariush locked on with a body triangle and looking for the choke. Miller gets to his knees but gets dragged back down with Dariush still locked on. 20 secs left. 10. Miller stands up one more time with Dariush on his back and dives head first to the mat. Looks like he got the worse of that one. 10-9 Dariush

Round 1 – The ladies waste no time and are going wild in the clinch. Paige scores a takedown but Felice takes her back with both hooks in. Herrig looking for the RNC. Got that Curran BJJ going on. VanZant stands up as Felice goes for an arm. Paige dumps her on her head and Felice lets go. Back to the feet in the clinch. Felice muscling her against the cage, then backs out. Front kick from Herrig. Clinch, knee to body from VanZant. They exchange knees and Paige gives her a judo throw to the mat and attacks from the top with punches, and she’s scoring. Paige attacking from half guard. But Felice recovers full guard. Up kick from Felice. Paige goes for a leglock in the final moments but Herrig survives. 10-9 VanZant

Round 2 – Big leg kick from VanZant but Felice answers with a nice one two. Paige slips. Felice pounces but they end up in the clinch against the cage. Felice tries to take her back. VanZant landing knees from the clinch. Paige drags her down but ends up on bottom. Not for long as VanZant sweeps and attacks with punches. Felice gets a reversal but Paige gets to her feet. Herrig stays on her though with a body lock, tries for a takedown but is unable to complete it. Herrig picks her up and goes to slam her but Paige rolls her over and takes side mount. Herrig gets her in half guard, they scramble and Paige gets to side mount. Herrig goes for an armbar. Paige stands up and pulls out. Paige now in north-south position. She stands over Felice and rains down several punches. 10-9 VanZant

Round 3 – The clinch fighting starts early and Paige gets the trip takedown and lands a few hammerfists before posturing up with several punches. Herrig trying to secure a leg but she’s taking shots the whole time. Paige traps an arm with a knee and lands several more shots. Somehow Herrig snakes around and takes VanZant’s back with both hooks in. Paige is able to swivel around and take top control. Hammerfists from Paige as Herrig looks for a leg. VanZant trying to finish and lands a flurry of punches from top control. She traps Herrig on her back against the cage and keeps her there for well over a minute controlling and landing shots. 10-9 VanZant

Round 2 – Holloway switching stances quite a bit, mixing it up. Nice body combo from Max. He’s being a lot busier than Cub so far this round. Nice leg kick from Cub buckles the leg. The right temple of Holloway showing signs of damage. Max scores with an overhand right. Side step leg kick from Max. Max clowning him a bit now. Left from Cub. Body shot from Cub. Stiff left from Holloway beats Cub to the punch. Body kick from Cub. Jab from Cub. Max using some great footwork. Flying knee from Max to the body. Couple left hooks and a knee from Holloway, and just misses a wheel kick to the head. 10-9 Holloway

Round 3 – Cub with the clinch and knee to the body. Max out-boxing Cub. Nice left hook from Cub though. Inside leg kick. Max with a high kick, blocked. Cub slips and Max kicks his legs. Back to  the feet and Max hurts him with a knee to the body. Holloway with a punch to the body and Cub is hurt and goes down. Max jumps on him and locks up an arm triangle but Cub survives. Left hook from Cub scores. Leg kick. Max counters with a straight left. He then hurts him with a punch combo and jumps on a guillotine. It looks like Swanson wants to tap, he tries to hold on, taps quickly on his way out. VERY impressive performance from Max Holloway. Domination.

Round 1 – If this goes past one round I’ll be very surprised. Jacare faced Camozzi in 2013 and submitted him in round one. Couple leg kicks from Camozzi. Leg kick and two big right hands from Souza. Nice jab from Camozzi, and a leg kick. Jacare takes him down and Camozzi holds his arms tight. Jacare passes to side mount using the cage. Knee on belly, body shots from Jacare. Jacare locks up an armbar and this fight is over. Camozzi taps out. Pretty much what we expected. Still, props to Camozzi for taking the fight on a week’s notice.

Round 1 – Here we go. Low kick from Machida. Rockhold with same. Overhand left and a right from Machida score solid. Rockhold calls him on. Machida scores again slipping and hooking. Rockhold scores with a punch and hops on a guillotine attempt. Machida survives but is on bottom and Rockhold attacks the body. Machida gets full guard now. Rockhold stacks him. Machida turtles up and gets to his feet. Rockhold hangs on and drags him back down and takes his back with one hook in. Machida rolls free and recovers full guard. He kicks Rockhold off but can only get to his knees and Rockhold is holding him. Machida in a three point stance. Rockhold kicks out his leg and takes his back and landing punches. Machida trying to survive. Rockhold with both hooks in on his back and landing big shots. 10 seconds to go and Machida fights to survive a rear naked choke. He survives but receives a big elbow. 10-9 Rockhold

1 thought on “‘UFC on Fox 15: Machida vs. Rockhold’ Live Results and Round-by-Round Updates”