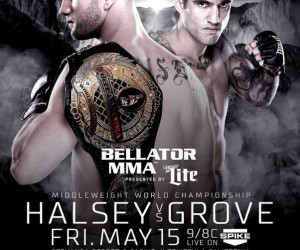 Tickets for “Bellator: Halsey vs. Grove,” which start at just $50, are currently on sale at Pechanga.comand the Pechanga Resort & Casino box office.

Jenkins, of Oceanside, Calif., is one of the most experienced competitors in women’s MMA. Fighting professionally since 2004, Jenkins now makes her Bellator MMA debut. The 33-year-old boasts past tussles with MMA notables Shayna Baszler, Tonya Evinger, Jan Finney, Kelly Kobold and Sarah Schneider, among others.

An Australian native, Blencowe is a world-class athlete and former Women’s International Boxing Association World light welterweight champion. After turning her attention to MMA in 2013, Blencowe initially garnered only mixed results as she adjusted to life in the sport. However, she has racked up three-consecutive stoppage wins as of late, and that run earned her a call from Bellator MMA.

Bunch is one of MMA’s most elite-level wrestlers as a two-time NCAA Division I All-American and two-time U.S. Olympic Team alternate. He now trains with the famed American Kickboxing Academy banner and has spent his entire professional MMA career under the Bellator MMA banner.

Meanwhile, Alliance MMA product Perez is a 10-year veteran of the sport who made his Bellator MMA in November and fought to a rarely-seen split draw. Still, Perez is unbeaten in his past four contests and now looks to get his first win in the promotion.

Yoo, of Irvine, Calif., makes his professional debut. He meets Morales, of Carson, Calif., who picked up a submission victory in the Bellator cage in his first professional contest.