Luke Rockhold on Lyoto Machida and having big balls 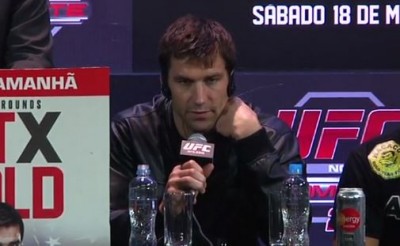 Luke Rockhold has perhaps the biggest challenge of his career so far in Lyoto Machida. The pair square off this Saturday in New Jersey. Luke is aware that he is in for a night of potential frustrations and possibly digging deeper in to his skill set than ever before. He says what he needs are something he has grabbed on a tiger before…just look it up.

A big set of balls. I’ve just got to come forward and go out there and dominate him,’ he said.

‘Machida likes to run around and dance and do his thing. I’ve just got to cut him off, slowly progress and be the bull. He tries to be the matador – sometimes you’ve got to play one role or the other and this is the time to be the bull and slowly progress, put him in a bad spot and make him fight my fight.

‘I’ve seen little things that he doesn’t like – there’s plenty of other fights too that I’ve seen that show a lot of holes and areas where I can take advantage of.

‘You see fights where guys stand in the middle ground too long – I’ve just got to make him think about everything. I’m a true mixed martial artist; I have everything to my game. He’s got to think about me taking him down, and then my kicks and my punches and everything that I bring to the table.

‘Machida has got a very small avenue to win this fight on the feet. Other than that, my avenue is quite big comparably to his.. He doesn’t really have much of a chance on the ground.

‘I’ll be operating at a different frequency than him – he doesn’t have the hip movement and the speed to keep up with me.’

And while Rockhold afforded Machida his respect, he has no plans to let it get in the way of victory.

‘I think there is a mutual respect between Machida and me – I respect what he does,’ he said. ‘He’s one of the best in the game and has been for a long, long time.

‘I respect what he does and I like a lot of the things he does. But at the same time, I’m going to go out there and show him my style and dominate.

‘I’ve been running marathons every day so I’m ready to go in there and chase him down.’

Lyoto Machida, Rockhold’s opponent in Jersey on Saturday has a game plan of his own.

I think if I apply my style, my technique, I can stop Luke, you know. If I can do my strategy, I can win the fight.

‘I know there was another fight in line for the title shot – Jacare vs Yoel Romero – but now, whoever wins out of me and Luke – deserves a title shot I think.

‘I can see a couple of weaknesses in Luke but it’s hard to say before the fight, it’s hard to foresee the fight. I have to be there to feel the fight- to see any mistakes he makes.

‘I am very well prepared for this fight. I had eight weeks of camp and I had great training. Glover [Teixeira] was there and many, many other fighters. So I am feeling very well, very calm, and I think I can do a great job.’