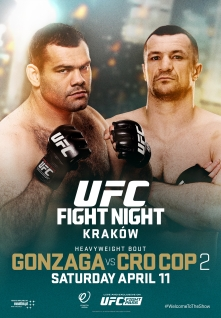 The fight that made me a fan of Gabriel Gonzaga was when he attempted to decapitate Mirko Cro Cop at UFC 70 in April 2007. A head kick from the Brazilian Jiu-Jitsu black belt caught Cro Cop off guard and he folded into a lump of soft flesh inside the Octagon. Today, the former Pride and K-1 champion will get his shot at payback against Gonzaga in the UFC Fight Night 64 main event in Krakow, Poland.

Stick with us here for live results and real-time highlight reports.

Round 1 – Lee immediately went for a takedown and repeatedly initiated the clinch throughout the round being out-matched on the feet. Lapilus was light on his feet and landed several clean kicks, punches, knees and elbows from the clinch. Lapilus 10-9

Round 2 – More impressive striking from Lapilus and more from Lee wanting to get the fight to the ground, although he did land a couple body kicks. Lapilus 10-9

Round 3 – Lapilus opened up Lee’s nose pretty good by the end of the round. Lee  looked very stiff in his standup throughout the fight. Lapilus was loose and mobile, out-struck Lee and defended most of the takedown attempts. 10-9 Lapilus

Round 1 – Bandel saved by the buzzer after being caught in a very tight arm triangle. 10-9 Ray

Round 2 – Ray ends up getting mount on Bandel and pounding on him until the ref stops it.

Round 1 – Badurek has some serious strong legs and base and was able to dominate the clinch, using knees to soften Albu up but never able to really get the fight to the ground. Albu looks to have the standup advantage. 10-9 Badurek

Round 2 – Badurek finally gets that takedown she’s been looking for but Albu catches her in a guillotine and forces the tapout.

Round 2 – Omielanczuk is able to score a takedown near the end of the round, goes for another but ends up on bottom. They end the round on their feet in the clinch against the cage. Both of these heavyweights are looking fatigued and are having to dig deep. 10-9 Omielanczuk

Round 3 – Lots of dirty boxing, knees and clinch work against the cage. Hamilton gets a takedown and Omielanczuk looks for the kimura in the final seconds. 10-9 Hamilton

Round 1 – Stasiak catches Meza’s front kick, puts him on the canvas where he takes his back and looks for the rear-naked choke. Though very tight Meza escapes before the bell. 10-9 Stasiak

Round 2 – Meza lands a big right from the top and controls Stasiak on the ground the final minutes of the fight, taking his back at one point. 10-9 Meza

Round 3 – Meza with an easy takedown early. Meza looking for the arm triangle from mount but Stasiak is able to escape. Meza gets back to mount and this causes Stasiak to give up his back. Stasiak forces a scramble and he locks on a guillotine but Meza pops out and returns to top control. Meza goes for a leg before the bell. 10-9 Meza

Round 1 – A takedown from Moraes in the final 10 seconds of the round.

Round 2 – Lebout getting the better of the standup at first but Moraes starts to find a home with his punches. Pretty close round but I’m leaning toward Moraes.

Round 3 – Moraes more aggressive with his striking this round and this helps him set up a takedown. Moraes controls top position until Lebout gives up his back in the final moments and is able to ultimately take top position before the bell. 10-9 Moraes

Round 1 – Fabinski with a hat trick of takedowns during the round, taking McLellan’s back at one point. Back to the feet McLellan jumps on a guillotine in the final minute of the fight. Fabinski escapes and ends the round on top. 10-9 Fabinski

Round 2 – Fabinski ducks into an upward elbow from McLellan but is still able to get hold of him and score the takedown. McLellan quickly back up though and they work in the clinch for a bit. Fabinski with another takedown and stays on top the final minutes. 10-9 Fabinski

Round 1 – Edwards with a straight left drops Baczynski. He follows up with a couple to end it. That’s it. No sweat.

Round 1 – Calderwood looks terrified before the fight. Calderwood standing with the boxer and using her kicks to even things up, but Moroz backs her to the cage with punch combos. Moroz jumps guard, locks on an armbar and Calderwood taps out fairly quick. Moroz definitely has more than good hands. Moroz exchanges words with 115 lb. women’s champ Joanna Jedrzejczyk after the match. Moroz says she wants to be the champion.

Round 1 – Lots of clinch work during the round. Westcott controlled the action more. 10-9 Westcott

Round 2 – Pawlak comes out aggressive and drops Westcott with a knee to the face in the clinch. Westcott is right back up and pressing Pawlak to the cage. Westcott just wanting to clinch and look for the takedown but ends up on the bottom as the round enters the final minute. Pawlak ends the round on top in side mount dropping elbows. 10-9 Pawlak

Round 3 – Pawlak rocks Westcott early with punches. Westcott clinches up though and presses Pawlak to the cage much to the displeasure of the Polish crowd. Westcott gets a takedown but can’t hold Pawlak there. Pawlak ends up getting a trip takedown of his own with 3 minutes to go. Pawlak controls most of the rest of the round.

Round 1 – Manuwa pressing. Blachowicz trying to counter with hooks and jabs. Manuwa presses him to the cage where they exchange knees. Blachowicz backs out, Manuwa lands a couple strikes then puts him back against the cage and lands more knees. Ref separates them. Jab from Blachowicz, looks for the takedown, stuffed. Couple of low kicks from Manuwa before the bell. 10-9 Manuwa

Round 3 – Blachowicz working the jab, inside leg kick. Manuwa fires back with a low kick and left hook to the body. He presses Blachowicz to the cage and puts knees to thighs. Blachowicz with the break and scores with a head kick. Manuwa head hunting now. Right, left from Manuwa. 2:30 to go. Manuwa clinches up, looks for a takedown but no dice. Ref separates them. Back to the clinch. They separate and Manuwa scores with a one two. Blachowicz backs out, shoots, stuffed. Working the jab. Manuwa stalking with under a minute to go, lands a right and left. Overhand right from Manuway. Blachowicz shoots, stuffed. Nice exchange before the bell. 10-9 Manuwa

Round 1 – Both Cro Cop and Gonzaga look to be in good shape. Right straight from Gonzaga. Overhand right grazes Cro Cop. Body kick from Gonzaga. No high kicks yet. Takedown from Gonzaga, takes half guard from top. Full mount from Gonzaga. Gonzaga jumps on a heel but Cro Cop survives and Gonzaga is back in his full guard. Gonzaga ends the round on top. 10-9 Gonzaga

Round 2 – Cro Cop could be waiting for Gonzaga to tire. Nice stiff left from Cro Cop, just misses a head kick. Gonzaga shoots, stuffed. Low knee from Gonzaga and time is called, briefly. Gonzaga dumps Cro Cop and takes top control in half guard. Cro Cop landing some nice elbows off his back. Full mount from Gonzaga. High mount from Gonzaga and he rains down a few punches. Nice elbow from Gonzaga, again. Cro Cop is cut open from that one. Couple punches from Gonzaga before the bell. 10-9 Gonzaga

Round 3 – Gonzaga shoots and Cro Cop avoids at about the 4 minute mark. Patience. Gonzaga presses Cro Cop to the cage. Knee from Gonzaga, backs up with a couple punches, shoots, stuffed. Cro Cop hurts Gonzaga with elbows and punches, he shoots in out of desperation but ends up on his back with Cro Cop inside full guard. Big elbows to body and head from Cro Cop. Nasty elbows from Cro Cop open Gonzaga up and he pounds him out with hammerfists. That’s a big one to get back for the Croatian. Well done sir. 40 ain’t nothing but a number.