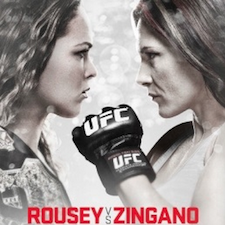 “UFC 184: Rousey vs. Zingano” takes place this evening from the Staples Center in Los Angeles and features Ronda Rousey defending her UFC women’s bantamweight title against Cat Zingano in the main event. Both these ladies are undefeated and someone’s “0” will have to go. Will Zingano be the one to dethrone the Rowdy one?

Also, check out our staff picks for our predictions on tonight’s fights, and stick around afterward to watch the UFC 184 post-fight press conference live stream.

Round 1 – Fullen hurt by a right hand and Torres head hunting trying to finish him off. Fullen lands a nice counter but he’s wobbly. Takedown by Torres but Fullen right back to his feet and seems to have recovered. Fullen hurt bad with another right but tries to defend himself and ends up getting a takedown. Torres gets back to his feet before the bell. 10-9 Torres.

Round 2 – Nothing too significant this round, but Fullen finished strong landing punches on Torres against the cage.

Round 3 – Fullen getting the better of the standup and lands a nasty flying knee to the body. Left hook scores and Torres walks right into a stiff right hand. Torres shoots, stuffed. After a lot of clinching and work Torres gets a takedown but Fullen right back up. Ref warns Fullen not to grab the fence. Close fight but Torres may have clinched it by controlling the action most of round 3 and winning round 1.

Round 2 – Krause with a couple low kicks and a right. He gets a takedown but Lazaro is right up and scores with a punch combo. Krause keeping on the pressure, shoots, stuffed. Jab from Lazaro. Right jab from Krause. Overhand right lands solid. Nice left hook to the body. Body kick. Snappy left hook. Right hand. Lazaro with a couple jabs. Lazaro stuffs a takedown attempt, lands a knee to the body. Time is called after Krause takes a low blow. Low kick from Krause. Double jab from Lazaro. Knee to the body from Lazaro, jab. Stuffs a takedown. Big left hook and a low kick from Lazaro. Krause shakes his head “no”. Close. 10-9 Krause.

Round 1 – Touch gloves. Potts with a couple low kicks. Potts ties him up against the cage. Lewis with a trip takedown but Potts right back up where Lewis presses him to the cage. Potts takes a low blow and time out is called. Lewis catches him with a punch and Potts goes down, looking for a leg lock. Potts with a kneebar attempt, it’s deep. But Lewis spins to safety and is back up. Potts shoots, and gets Lewis on his back. Potts on top in half guard. Lewis hits a reversal as Potts goes for a kimura. Lewis lands a couple nice punches, then a big right. This causes Potts to get up and try to get the takedown but the bell sounds. 10-9 Lewis.

Round 2 – Potts looks for a takedown early but is eating some big punches. Lewis dives in with a right that misses, now inside the full guard of Potts. Lewis gets to full mount and is teeing off with punches until the ref stops it.

Round 1 – Means hurts Lima early with punches and a knee to the face. Lima partially recovers only to eat some elbows, and straight left. Means pressuring. Right hook from Lima. Big left drops Lima and he finishes him off. Wow.

OFFICIAL RESULT: Roman Salazar vs. Kid Yamamoto ruled no contest (Salazar unable to continue due to accidental eye poke) – Round 2, 2:37

Round 1 – Carneiro gets a takedown and is in side mount. Munoz gets to his knees but Carneiro hops on his back and sinks in the choke and Munoz goes to sleep for awhile before the ref stops it. A little scary. Rogan comments on it saying, “I don’t know what the ref was thinking [letting him hold the choke that long]”.

Round 1 – Tibau looks enormous. Left from Tibau. Takedown from Ferguson, lands a couple shots. Tibau up but getting hit. Ferguson staggers him with a punch. Tibau shoots in and Ferguson drags him to his knees, takes his back with both hooks in, locks in the choke and Tibau taps out. Big win for Ferguson. Very impressive. But they showed a promo of his before the fight and he said, “I came here to kick ass and chew bubble gum and I’m all out of bubble gum.” Or something similar. … He needs to up his promo game, but he’s on point in the cage. And after the fight he did very well on the mic. Ferguson’s a real fighter and a really good fighter and I see him as an eventual title holder.

Round 1 – Right from Jake. Left jab. Koscheck scores a takedown after a few punch exchanges. Jake gets to his feet but Koscheck on him looking for the double against the cage. Knees in the clinch from both. Jake’s back still to the cage. Overhand right from Ellenberger. Again he scores with it. Jake throws up his hands wanting Koscheck to engage. End of round. Fairly close.

Round 2 – Koscheck goes for the takedown right away looking for the double against the cage. Ref separates them after a time. Ellenberger getting the better of the standup. Kos keeps wiping his left eye and he’s reluctant to engage. Overhand right from Ellenberger. Jake touches him up. Kos looks completely off. Shoots for the single, presses Jake to the cage. Ellenberger locks Kos up in a choke and he taps after struggling for quite awhile. Replay shows Kos foaming at the mouth during the choke.

**We see a shot of Brock Lesnar in the audience**

Round 1 – Are we going to see lighting bolts come out of Rousey’s eyes? She seems like a super hero at this point in her career. Touch gloves. Cat looks ready. Cat shoots in right away but Ronda reverses the takedown and gets a straight armlock and Zingano taps out in the first few seconds of the fight. Fastest yet I think. 14 seconds is the official ruling. Fastest submission win in UFC championship history.