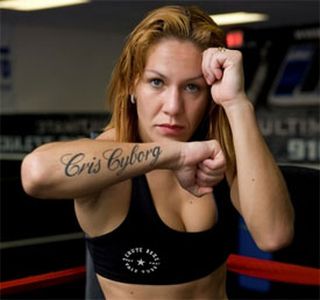 Invicta FC women’s featherweight champion Cris Cyborg defended her title against Charmaine Tweet on Friday night in Los Angeles, starching Tweet via TKO in 46 seconds. The fight was all Cyborg as she landed a huge overhand right early that put Tweet on her bicycle before dropping her with a huge bomb later.

Referee Herb Dean called a stopped to the fight with Tweet on her feet taking damage while offering nothing in return. Cyborg improves to (13-1, 1NC) while Tweet drops to (6-5). UFC President Dana White was in attendance to watch the fight, and clearly the pressure will continue to build for him to bring Cyborg to the UFC after passing several drug tests while giving an outstanding performance.

The full Invicta FC 11 fight results are below: