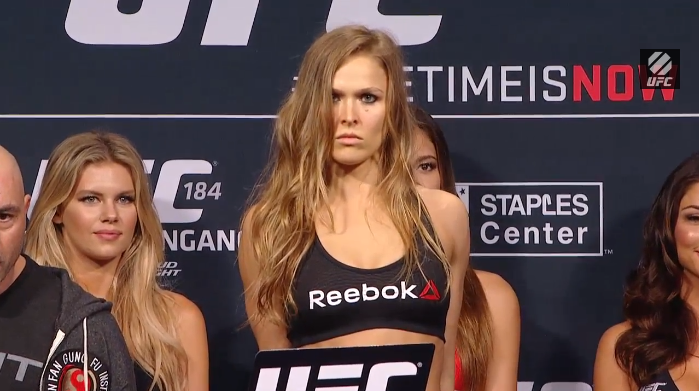 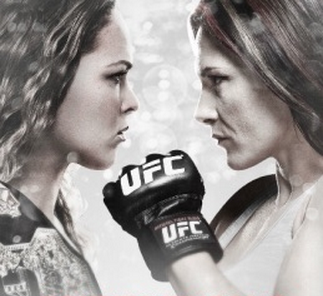 Tonight UFC 184 takes place in Los Angeles at the Staples Center and it’s a pretty solid card. The PPV’s main event is female fighting phenom UFC bantamweight champ Ronda Rousey squaring off against Cat Zingano. Cat is considered the biggest threat for Rousey in the division right now and the only person who could legitimately take her deep in to championship round territory. Holly Holm also makes her debut. The decorated female boxer is now an MMA fighter and she steps on to the big stage tonight facing Racquel Pennington in what will be a fair test of Holm’s skill set. There are a number of significant fights that have career implications for a few guys still on the roster. Here are 3 questions UFC 184 will answer.

1. Is Holly Holm ready to face the UFC’s roster of women?

She’s a great boxer, excellent, but is she going to fold in The Octagon? Racquel Pennington is no slouch and make no mistake she took this fight to make a statement. Usually when a fighter steps in to cage for the first time in the UFC with her kind of hype they are fed a lesser fighter like Cro Cop received in Eddie Sanchez. It’s to get the UFC curse of losing in their first fight behind them and familiarize them with the feel of The Octagon and the atmosphere of the whole thing. Understand, elite level strikers like Holm are an investment and if they lose it’s a loss in momentum, and egg on the face of the UFC brass. Holm has trained with tough fighters at Jackson’s Academy, like my future wife Julie Kedzie, and she is ready technically there is no doubt. Holly Holm has to defeat Pennington and do it decisively to shut up her doubters.

2. Is it time for Josh Koscheck to hang up the gloves?

Let’s face it – love him or hate him Josh Koscheck has been in the UFC for a long time. Like most veterans he is on the tail end of his career now at the age of 37. Sadly, he has been blasted in his last two fights losing brutally to Robbie Lawler by KO and to Tyron Woodley by TKO. It’s a place Josh is not familiar with. How is he mentally after those losses is another factor contributing to his potential retirement. If he gets knocked out or TKO’d he will most likely retire or Dana will make him.

3. Is Cat Zingano the one to dethrone Ronda Rousey like experts say?

Cat’s husband died and she got injured losing a spot as a coach on TUF as well as a title shot not long ago. She recently came back and mauled Amanda Nunes,  before that she smashed Miesha Tate making Rousey take notice. She looks to be in phenomenal shape by the weigh in photos and her confidence has returned. If Cat defeats Ronda definitively there is no question she really is the best 135 female fighter ever and no one is even in her league.