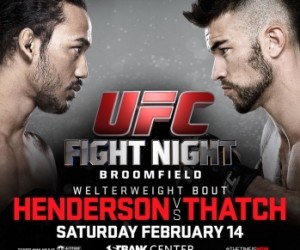 The UFC Fight Night 60 event is set to take place on Saturday, February 14, in Broomfield, Colorado, and will be headlined by the welterweight scrap between Ben Henderson and Brandon Thatch. Henderson is moving up to the welterweight division for the first time, and is taking the fight on short notice after fighting a couple weeks ago against Donald Cerrone.

Henderson lost a controversial decision against Cerrone in which most fans and pundits felt he deserved the win. Thatch was originally scheduled to fight Stephen Thompson, but Thompson pulled out of the bout with an injury, but after a near year and half away from the cage I’m sure Thatch will be ready to throw down.

The co-main event will feature a featherweight scrap between Cole Miller and Max Holloway. The event will air on FOX Sports 1 with the preliminary bouts beginning on UFC Fight Pass at 7:30 p.m. ET. The fights will then transition over to FOX Sports 1 at 8 p.m. ET with the main card beginning at 10 p.m. ET.