UFC heading to Poland on April 11, Cro Cop vs. Gonzaga 2 to main event 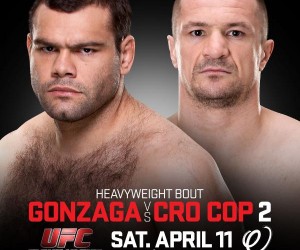 We’re coming to Poland on April 11th and here’s your main and co-main!! Boom! pic.twitter.com/PvosNfDiud

The UFC announced that Mirko Cro Cop had been re-signed to the promotion after a three year hiatus earlier this week. The move was a curious one since Cro Cop is forty years old and well past his prime, but with him being very popular in the European market the move makes sense for him to headline the event. This will also be a rematch I’m sure that Cro Cop was interested in, considering that Gonzaga knocked him out in a huge upset in 2007.

This will be the UFC”s inaugural event in Poland and will take place at the Krakow Arena.

Cro Cop (30-11-2, 1 NC) competed in two MMA bouts in 2014, winning both fights against Satoshi Ishii via TKO. He last competed in the UFC in 2011, losing to Roy Nelson via third round TKO. In fact, Cro Cop lost his last three UFC fights via TKO/KO.

Gabriel Gonzaga (16-9) is coming off back-to-back losses, including a TKO loss to Matt Mitrione in his last outing in December 2014. Gonzaga is a former title challenger, but is most known for derailing the Cro Cop hype train by knocking him out with a devastating headkick of his own at UFC 70 in 2007.

2 thoughts on “UFC heading to Poland on April 11, Cro Cop vs. Gonzaga 2 to main event”