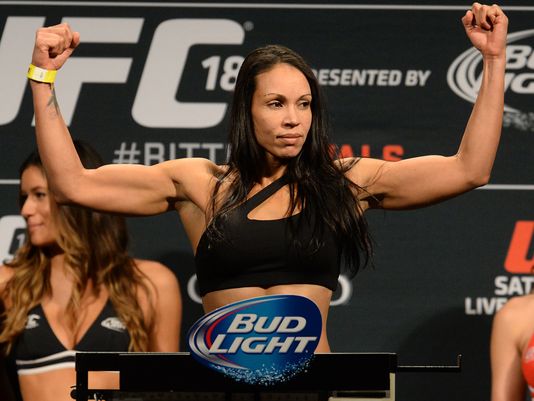 The first bout of 2015 is in the books and it was quite a display in the women’s bantamweight division. Marion Reneau stepped into the Octagon for the first time and showed that she belongs there. Reneau’s striking was way too much for Alexis Dufresne. Marion’s first few strikes bloodied the nose of Dufresne and it was all”Mo” after that.

Reneau was able to stay moving and stay active to punish Dufresne. Her punches were landing at will as Dufresne has little to no head movement. An early takedown from Dufresne was stuffed. Reneau rocked Alexis early and followed that up with brutal knees to the body.

The second round played out much as the first. Dufresne was unable to hold Reneau down and Marion unloaded. Watching the fight was painful as Dufresne was bleeding something awful from her nose and mouth. Joe Rogan was all for calling the fight after the second round but Dufresne came back out and did so swinging. Both ladies are Brazilian Jiu Jitsu brown belts but that didn’t matter as Reneau dominated from the opening bell all the way to the finish.

Rough night for Dufresne as not only does she get a complete beat down handed to her but she has to hand over part of her purse for missing weight. The judges scored the fight 30-26.30-26,30-25.

Reneau told Rogan “I didn’t deserve this spot, I earned it.”.

Stay close for more on tonight’s action as UFC 182 rolls on. Full play by play and results by JJ Bratcher right here.