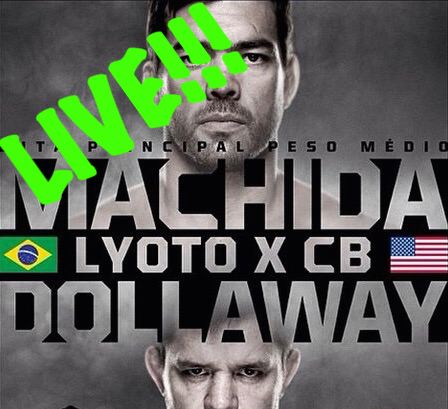 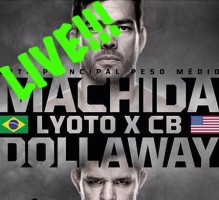 UFC Fight Night 58 takes place this evening from Jose Correa Arena in Barueri, Sao Paulo, Brazil. Headlining the event, which will broadcast live on FOX Sports 1 here in the U.S., will be a middleweight match-up between No. 4 ranked Lyoto Machida and No. 10 ranked CB Dollaway. And in the co-headliner, former bantamweight champ and current No. 1 contender Renan Barao takes on No. 14 ranked Mitch Gagnon.

PMN (www.prommanow.com) will provide live results of the entire card and play-by-play commentary for the main card.

Round 2 – They exchange leg kicks and a couple punches and dos Santos’ finger pops out of socket. He stops the bout, shows his finger to the ref, then fixes it himself by popping it back in place. The referee calls the fight… although dos Santos wants to continue. Unfortunate ending.

Round 1 – Left from Rhodes, Silva takes him down with a single leg. Rhodes hanging onto a guillotine for a moment, lets it go. Silva passes easily to side mount. Silva locks on an arm triangle and puts Rhodes to sleep. Just like that.

Round 1 – Sorry, missed this round, was busy writing up this.

Round 2 – Yeah, missed that one too. Didn’t miss much from what I can tell.

Round 3 – Magomedov throws a check left hook that drops Silverio. Magomedov follows up. Silverio is able to survive momentarily but as he starts to get up Magomedov shuts him down with punches with only 3 seconds left in the fight.

Round 1 – Left hook from Cummins. Clinch, knee to the body from Carlos Junior. Takedown from Cummins, working some g n’ p as Carlos Junior goes for a leglock. Cummins stacks him. Carlos Junior tries switching to a toe hold, but lets it go. Cummins still has him stacked, thus preventing the full extension of the leglock. Cummins escapes to his feet, then takes top advantage and drops some punches. Carlos Junior going for the leg again as Cummins continues the g n’ p from inside full guard. Cummins passes to side mount, drops an elbow and hammerfist before the bell. PMN scores the round 10-9 Cummins.

Round 2 – Cummins with the takedown and working the g n’ p, picking up where he left off in round one. Carlos Junior looks for an arm but punches from Cummins preventing him getting anything going. Carlos Junior goes for a heel hook but Cummins’ great wrestling base allows him to escape and keep top control. Couple hammerfists from Cummins before he stands up, then lays back in guard delivering punches. Cummins eats an upkick and gets to his feet. Carlos Junior now looking to outstrike Cummins on the feet. Cummins goes for a single leg, Carlos Junior defends. Cummins switches to a double leg and gets it. He eats an illegal upkick right before the bell. PMN sees it 10-9 Cummins.

Round 3 – Cummins pressing and perfectly times a takedown, then takes top position in half guard with the g n’ p. Hammerfist from Cummins, then an elbow, then punches. Cummins wearing him down. Cummins, the wrestler, takes full mount on the BJJ black belt. Carlos Junior recovers full guard fairly quickly though. Under a minute to go. Carlos Junior gets to his feet. He suplexes Cummins, who bangs his head on the canvas. Carlos Junior gets on his back, both hooks in, but with only 15 seconds to go. Cummins escapes. PMN scores the round 10-9 and the fight 30-27 for Cummins.

Cummins could be heard after the announcement telling Carlos Junior to come train with him.

In a seemingly inexplicable scenario, Fox Sports 1 just started broadcasting an old card… quite strange. After a few minutes it appears we are back on track with Barao vs. Gagnon coming up. Very weird. Someone f*cked up somewhere.

Round 2 – Gagnon able to get off with a few punches, gets a body lock with underhooks and presses Barao to the cage. Looking for the takedown. Ref separates them. Body lock takedown from Barao, but he immediately pops back up and Barao is pressing him to the cage. The separate. Jab from Gagnon, but eats a left hook. Gagnon locks on a standing guillotine but Barao twists out. Gagnon landing some nice punches, takes a hard knee to the body though. Gagnon looking for the takedown against the cage. Gagnon eats a knee from Barao. PMN scores the round 10-9 Gagnon.

Round 3 – Leg kick from Gagnon, he blocks a head kick. Barao clinches up looking for the takedown, presses him to the cage. Backs out. Gagnon avoids a flying knee. Body kick from Gagnon. He presses Barao to the cage, drops levels for a single leg attempt. Barao defends. Left hook from Gagnon, but Barao is all over him and gets a trip takedown. Gagnon right back up, and Barao presses him to the cage. Gagnon turns him around. Lands a nice elbow on the break. Gagnon looks to throw Barao but ends up taken down by Barao, he gets full mount, locks on a head and arm choke and gets the tap.

Round 1 – CB pressing with a feeling jab. Inside leg kick from Machida. CB uses a Machida-esque leg twitch feint. Machida fires back with a liver kick that folds Dollaway. Machida follows up with punches and this fight is over before it even gets started. Hail Bas Rutten!