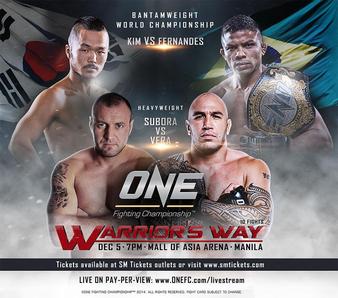 Part of what ONE FC has going for it is the Pride-ish rules that are in place. Soccer kicks and other bad assery are keys to the success. This morning Timofey Nastyukhin absolutely destroyed Eduard Folayang with a brutal flying knee followed up by kicks to the dome. It was pretty cool .

ONE FC 23 : Warrior’s Way went off this morning in Pasay City, Philippines and featured the promotional debut of Brandon Vera and Roger Gracie. The two found success in their fights and look to build off of that. The main event featured champ Bibiano Fernandes and he retained his title with a second round submission over Dae Hwan Kim.

If you missed it, here are the results.