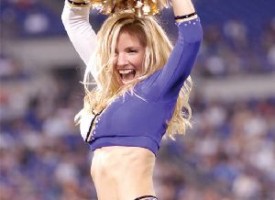 What is this world coming to. Why in the world are attractive older women taking advantage of young boys. Many argue that this isn’t much of a crime but what the hell is going on with these teachers, cheerleaders and thirsty cougars of our time?

The latest news story to grab a headline is that of a former Baltimore Ravens pom pom girl. According to WBNS-TV10  Molly Shattuck was indicted Monday on two counts of third-degree rape, four counts of unlawful sexual contact and three counts of providing alcohol to minors in Deleware. Oh, Molly is 47 years old and married to a super rich energy guy.

Police involved in the situation state that a 15-year-old boy reported that Shattuck began an inappropriate relationship with him near Baltimore and that it culminated with the two having a sexual encounter. How does one strike up a realationship like this? Crazy!

Officials went on to say that the naughty business went down at a at a vacation rental home in Bethany Beach, Delaware, over Labor Day weekend. My guess is that this youngster got to bragging about his escapade and it got Mrs. Shattuck in the world of trouble she faces. Molly is presumed innocent until proven guilty.

Molly is  the estranged wife of a prominent Maryland energy executive Mayo Shattuck who used to be the CEO of Constellation Energy Nuclear Group in Baltimore.