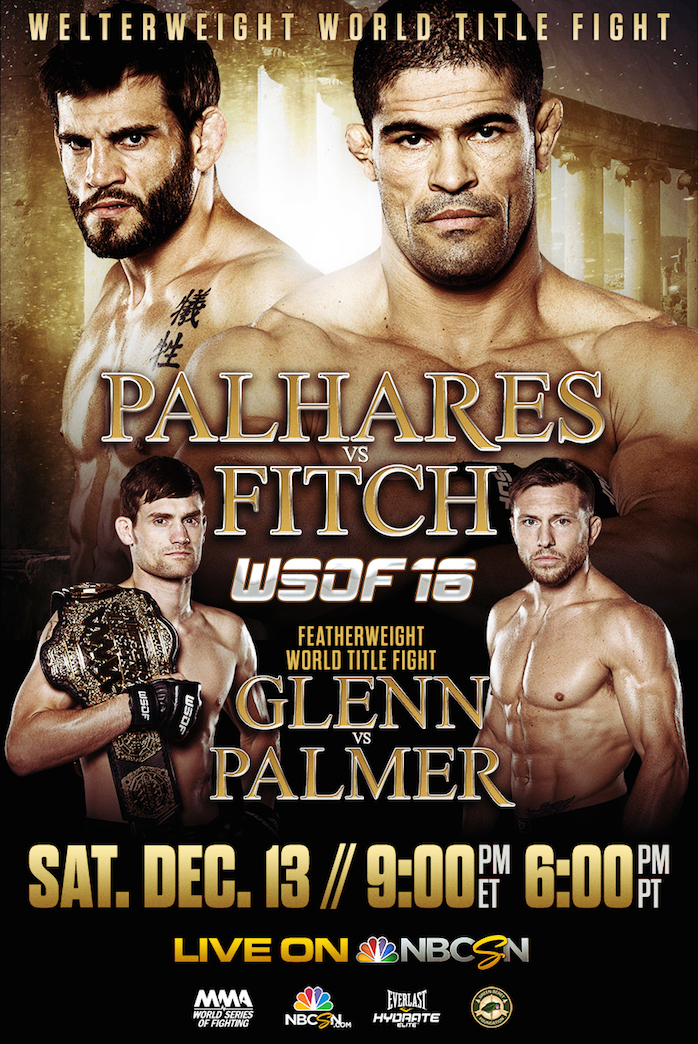 World Series of Fighting (www.wsof.com) announced today a highly-anticipated, welterweight (170 pounds) world championship Mixed Martial Arts (MMA) main event showdown that Bleacher Report has dubbed a “must see’ fight, between dangerous, reigning champion Rousimar “Toquinho” Palhares(16-6) of Dores Do Indaia, Minas Gerais Brazil and fellow Brazilian Jiu-Jitsu black belt and superstar Jon Fitch (26-6-1, 1 NC) of San Jose, Calif. on Saturday, Dec. 13, live at 9 p.m. ET on NBC Sports Network (NBCSN) from a location to be announced soon.In the co-main event, streaking finisher and reigning featherweight (145 pounds) world champion Rick “The Gladiator” Glenn (15-2-1) of Marshalltown, Iowa will put his title on the line against submission powerhouse and Team Alpha Male alumnus Lance “The Party” Palmer (8-1) of Sacramento, Calif. “We and the MMA fans around the world are looking forward to this tremendous Main event that’s headlined by two of the world’s fiercest fighters – Rousimar Palhares, our champion, and legendary MMA fighter Jon Fitch,” said World Series of Fighting President, six-time world champion and two-time Hall of Famer Ray Sefo. “From top to bottom,” continued Sefo, “we have a stellar lineup set for our final, live NBCSN telecast of the year, and I think it sets the tone for another year of incredible growth for us in 2015.”Rousimar Palhares vs. Jon FitchPalhares, the reigning World Series of Fighting welterweight kingpin, has also become one of the sport’s most feared executioners, with an unmatched ability to trap his opponents in a variety of leg locks.  To date, 13 of the stocky and muscular fighter’s 16 career wins have come by way of submission, 10 of which he produced with either a heel hook or ankle lock.On March 29, Palhares was crowned champion after submitting Steve Carl with an inverted heel hook just over one minute into the first round of action.  During his 10-year career, Palhares has claimed wins over a number of stellar adversaries, including,Jeremy Horn and Mike Pierce, whom Palhares tapped out with a heel hook just 31 seconds into their fight. Also a decorated submission stylist as well as a longtime member of San Jose’s Team AKA, Fitch will make his second start of 2014 and aim for his third consecutive win, after earning a split decision over Marcelo Alfaya on Oct. 26, 2013 and a unanimous decision over superstar Dennis “Superman” Hallman on July 5, 2014, respectively.During his 12-year professional career, Fitch has submitted or scored TKO’s on a long list of rival superstars, including Roan Carneiro, Josh Burkman, Thiago Alves, and has earned decisions over Diego Sanchez, Erick Silva and Ben Saunders.Rick Glenn vs. Lance Palmer The 25-year-old Glenn is looking to extend an unbeaten run that began 13 fights ago, in June 2010, and a 3-fight win streak under the World Series of Fighting banner.  In those 13 starts, Glenn finished 10 of his opponents by way of TKO or submission, including his last opponent second round TKO stoppage of Georgi Karakhanyan, on June 21 2014.Palmer, a 26-year-old standout, is looking to claim his second consecutive win after submitting Nick LoBosco with a rear-naked choke in the first round (4:15) of action in the World Series of Fighting cage on June 21.  Palmer has produced four of his eight career wins by way of submission.Two additional, main card bouts will be announced soon. The live, four-bout NBCSN telecast of WSOF 16: Palhares vs. Fitch will begin at 9 p.m. ET on Dec. 13.