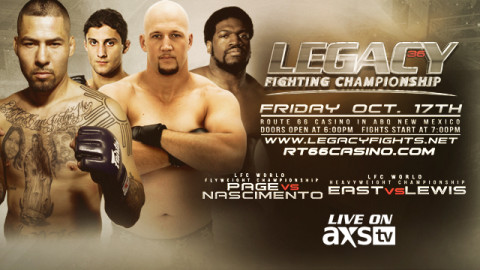 LOS ANGELES – Oct. 17, 2014 – AXS TV FIGHTS: LEGACY FIGHTING CHAMPIONSHIP 36 delivers knockout finishes to cap the night as two titles were decided in the main and co-main events. In the anticipated inaugural heavyweight title fight, Cody East (9-1) defeated Vernon Lewis (4-3) by way of TKO in the first round and Damacio Page (19-9) knocked out Brian Hall (7-3) in the first round.

Results from the televised main card are as follows: