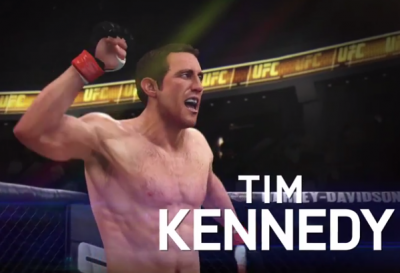 Free content update No. 3 is coming to EA Sports UFC and will soon be available for download on PS4 and Xbox One. The update will include two new fighters, Gunnar Nelson and Tim Kennedy, as well as several gameplay improvements and in-game animations.

Take a look at this video to see the new fighters in action and peep the latest gameplay additions including Guillotine Takedown Reversals and Finish the Fight 2.0:

· Finish the Fight 2.0: Finish off a rocked opponent, running them down across the Octagon with a flurry of punches once they’ve been wobbled.

· Guillotine Takedown Reversals: Users can now attempt a Guillotine submission while being taken down. This move is only available to fighters who can perform a Guillotine choke from Full Guard. To initiate the submission, deny the takedown by pressing R1/RB and down on the Right Stick.

· Takedown Variety: More variety added to takedowns based on denial and input times. Perfect takedowns will now end in Half Guard, while late denials or inputs will end in Full Guard.

· Slips: Back slips will now hold longer to avoid strikes and side slips now have improved evasive properties.

· Nick Diaz in Middleweight Division: Silva vs. Diaz might still be four months off, but with Nick now available for play in the Middleweight division, you can start matching them up immediately. Manual Taunts have never been so useful.
[ads1]
[ads2]