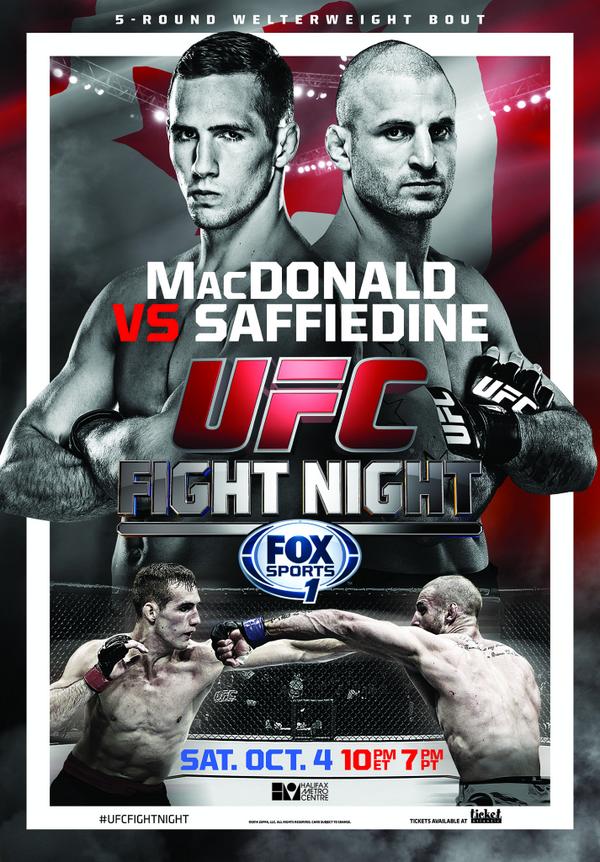 FOX Sports 1 presents UFC® FIGHT NIGHT ON FOX SPORTS 1: MACDONALD vs. SAFFIEDINE on Saturday, Oct. 4 (10:00 PM ET), headlined by a clash of top-10 welterweights, when No. 2-ranked Rory MacDonald (17-2) battles No. 9-rankedTarec Saffiedine (15-3). The highly anticipated bout caps off the three-hour main card, as well as the two-hour UFC FIGHT NIGHT PRELIMS ON FOX SPORTS 1 (8:00 PM ET), all live as part of the network’s stellar FOXtoberfest.

British Columbia native MacDonald has won seven of his past eight bouts, with recent victories against Demian Maia and Tyron Woodley. Belgium’s Saffiedine has his sights set on a title shot, and the former Strikeforce champion is well on his way to that goal if he can extend his five-fight win streak.

UFC on FOX analyst Brian Stann believes this is an evenly matched fight: “MacDonald is a very well rounded fighter who can control the distance with his jabs, is very strong in the clinch and can take you down and dominate you from there. When people think about Saffiedine, they think about those devastating leg kicks, but people underestimate his clinch and the wrestling game.”

However, MacDonald could be vulnerable to Saffiedine’s leg kicks, says UFC on FOX analyst Rashad Evans: “I think it’s going to take more than the jab for MacDonald. That jab will leave him in a vulnerable spot. Those leg kicks from Saffiedine will get there before the jabs. He’s really going to have to mix it up by wearing him down, get some clinches in there, make it more of a brawl and that’s his best chance to win this fight.”

Leading up to Saturday’s main event, FOXSports.com offers comprehensive coverage of FIGHT NIGHT, including interviews with the main fighters and fight analysis. On FIGHT NIGHT, monitor the action with the live blog and keep score with FightTrax, the app that tracks all the fight action in real time. Follow @UFConFOX on Twitter and use the hashtag #UFCFightNight for the latest updates.

Customers of participating video providers may access live streams of the UFC FIGHT NIGHT: MACDONALD vs. SAFFIEDINE through the FOX Sports GO app for iOS devices, as well as on desktops through FOXSportsGO.com.